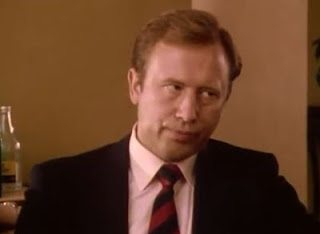 Spare a thought for British character actor Colin Farrell, now condemned to be referred to as Colin Farrell (II) in deference to the Irish-born Hollywood 'throb of the same name - who presumably never tried to join Equity.

Our chap is the affable, boyish, slightly sneaky-looking Colin Farrell who showed up in some decent TV in the '70s and '80s; Alan Plater's 'Trinity Tales', 'Tales of the Unexpected', 'Sorry!', 'Blakes 7' and 'Hadleigh'. He was also a regular as the dirty-minded Ernie Hadfield in the undertaker comedy 'In Loving Memory' with Thora Hird, but perhaps his most memorable role was as the universally despised 'orrible Norris in 'Porridge'.

I notice that in recent years he has been obliged to take billing as 'Col' Farrell, which seems a shame as almost everybody in the UK had laughed heartily at him digging up the pitch at Elland Road two years before the 'other' Colin Farrell was even born. Still, that's showbusiness.


*[edit: not 'Simpsons' character Troy McClure, as I originally wrote...] 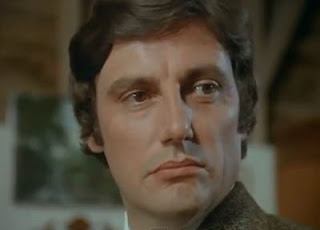 Sullen and intense-looking actor whose perma-scowl was a defining feature of the clunky BBC cult space opera, 'Blakes 7' between 1978 and 1981. He played Avon, whose cynical self-interest, dubious loyalties, and kiss/kill relationship with the show's arch-baddie, slinky Federation commander Servalan, drove most of the key storylines.

Before 'Blakes 7', Darrow had appeared in a few roles in middling popular dramas ranging from 'Emergency Ward 10' and 'Coronation Street' to 'The Saint' and the gripping Nazi-fest 'Manhunt'. A big break was playing the Sheriff of Nottingham in the 1975 BBC series; The Legend of Robin Hood', in which he got to exercise his sinister glare to good effect. He was in 'Doctor Who', before and after 'Blakes 7', and made a convincingly devious Mr Carker in the BBC's 'Dombey & Son' in 1983.

Darrow never got much film work. In fact, from imdb it looks as though he only hit the big screen a couple of times, playing doctors in both 'The Raging Moon' (1971) and 'Die Another Day (2002).

Since the '80s, you may have caught his regular appearances in 'Law & Order: UK' or his part as roguish middle-aged biker Eddie Fox in 'Emmerdale', but increasingly he has found a niche in the world of video game voiceovers. I've never heard of any of them and won't list them here, but I hope we see more of Paul Darrow on our TV and cinema screens in future.

Film of the day:
The Weekend Murders (1970)
aka: 'Concerto per Pistola Solista'

A real oddity. This 1970 Italian production mixes the high-style, lurid-bloodstain, mod weirdness of the classic "Giallo" movie with the tongue-in-cheek British country-house whodunnit. Shots of tweeds and golf-clubs against shots of blood-filled bathtubs, crash zooms on off-kilter belfries and the trademark eyeball-tight close-ups.

Shot on location in East Anglia by the Italian crew in the underexposed saturated-colour style of the genre, it offers a weirdly vivid view of England through European eyes. Perhaps the strangest thing is seeing jolly old Lance Percival in a leading role as Scotland Yard's Superintendent Grey, albeit leavened with a bit of light comedy business involving stereotypical bumbling local copper Sergeant Thorpe – played by Italian veteran Gastone Moschin, complete with goofy 'English' false teeth. The only other familiar face is the dear old major from 'Fawlty Towers', Ballard Berkeley, as the butler.

It doesn't seem to have ever had a UK release, so I imagine few people here have ever seen it, and to be honest, it's pretty hard going a lot of the time. It looks as if the Italian actors did their lines in Italian and the Brits did theirs in English, so presumably the scenes didn't make much sense to either on the set. Still, it's got some stylish moments.

You can watch it on YouTube here: 'The Weekend Murders'

The Weekend Murders - imdb
Posted by fiftywatts at 08:57 No comments: 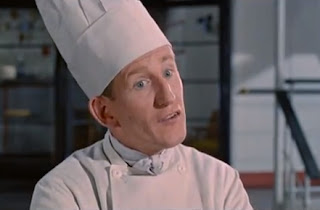 The unmistakable, agile and angular features of John Lancelot Blades Percival - that long crooked nose and the teeth seemingly trying to escape from under his jutting upper lip - combined with his quickfire delivery and timing to make him a comedy star of the '60s. He featured in a string of middling movies as a sure pair of hands for dimwit and klutz roles. He's in 'Carry On Cruising' (1962) of course, as the bilious ship's cook (Charles Hawtrey pulled out with only a few days until filming), and there was a solid run of jokey parts through the early part of  the decade.

The lucky break with the 'Carry On…' team probably helped his profile, but possibly not as much as his regular appearances on television's 'That Was The Week That Was', where he was a natural fit for the satirical skits and he became a household name for his topical calypso numbers. One of these, 'Shame and Scandal in the Family', was a Top 40 hit in 1965. As the decade wore on, his combination of wacky charm and anti-establishment credentials saw him in demand for pop-music tie-ins, like voice-over work on the Beatles animated adventures (he was Paul and Ringo) which led to him voicing Old Fred in 'Yellow Submarine' (1968). Less memorably, he also featured in Herman's Hermits 'Mrs Brown You've Got A Lovely Daughter' the same year.


An interesting aside is the Italian thriller 'The Weekend Murders' (1970) which saw him in a leading role, albeit stylised and semi-comic. Shame and scandal was to follow however, when the Kent-born actor was involved in a road accident on the A20 in which his Jaguar XJ6 was alleged to be racing with another similar car. An unfortunate Rainham man was killed in the resulting smash.

Whether or not the accident had anything to do with it, work post '70 was a bit less fun. There were movie roles in 'Up Pompeii' (1971) and its follow-ups, and similar British smutty comedies of the period: 'Our Miss Fred' (1972), leading to 'Confessions from a Holiday Camp' (1977) and 'Rosie Dixon: Night Nurse' (1978). All rather poor.
TV work kept coming, though rather intermittently by the '80s, and these days he makes a living on the after-dinner speaking circuit.

Update 9/1/15: Sorry to hear that Lance Percival died on January 6 after a long illness.

Posted by fiftywatts at 11:59 No comments: 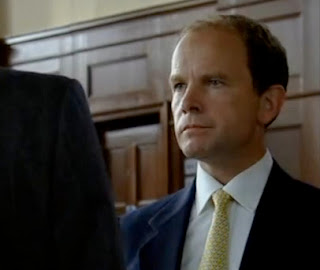 Another of the grey men. Simon Chandler's assured portrayals of middle-class anxiety and establishment brinkmanship seem to have led to his being cast in a long string of substantial TV roles. His longest and probably highest profile residency in a TV series has come in 'Judge John Deed' in which he plays Martin Shaw's machiavellian nemesis Sir Ian Rochester. He was also in the wry comedy 'Teachers' and played the Reverend Farebrother in the 1994 adaptation of 'Middlemarch'.


It's a bit of a giveaway that your profile isn't as high as it could be, however, when you get cast as a number of characters over the course of a long-running series. He has been in 'The Bill' in several different one-off roles between 1992 and 2007, but more worryingly, was able to pop up in 'Doctors' in 2011 as one Elliot Taylorman, despite having appeared as semi-regular Andrew Hewitt in three different earlier storylines. The 'Doctors' audience was presumably untroubled by any confusing memory of that character.


More satisfying TV work has included: 'The Singing Detective', 'Brideshead Revisited', 'Bulman', 'Anglo Saxon Attitudes' and 'The Thick of It'. A glance at imdb also reveals that he has also appeared in a quite impressive collection of major feature films, ranging from 'The Bounty (1984), 'Vera Drake' (2004) and 'Perfume, The Story of a Murderer' (2006) to 'The Iron Lady' (2011), 'The King's Speech' (2010) and the voice of Merry in Ralph Bakshi's truncated and gloomy animated version of 'The Lord of the Rings' (1978). 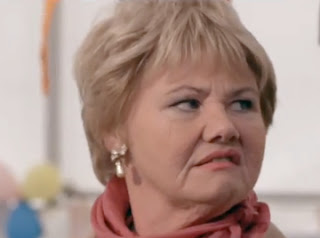 Versatile alumna of the E15 drama school, she's been quite a success on the serious stage, and her combination of bulky presence and basilisk gaze have led to a career on TV playing shrewd farmer's wives, social workers, cooks and nurses. Memorable in the Eccleston/Piper-era 'Doctor Who' as Slitheen-in-disguise Margaret Blaine, she has endured a long period of bit-parts to get there. She was a regular in 'Bergerac' in the early '80s as Barney Crozier's formidable secretary, Charlotte, and stuck with the dire 'hairdresser drama' 'Cutting It' for its long run. She was also in the late-'90s series 'Holding On' which was considered quite cutting edge at the time.

Her other regular work seems to be in kids TV – not perhaps the best arena in which to break out of the bonds of typecasting: See 'The Queen's Nose', 'The Worst Witch', 'Wizards vs Aliens', 'The Sparticle Mystery', etc...
﻿﻿ 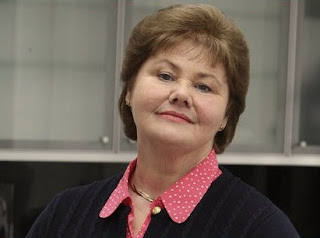 Annette Badland - imdb profile
Posted by fiftywatts at 07:13 No comments: