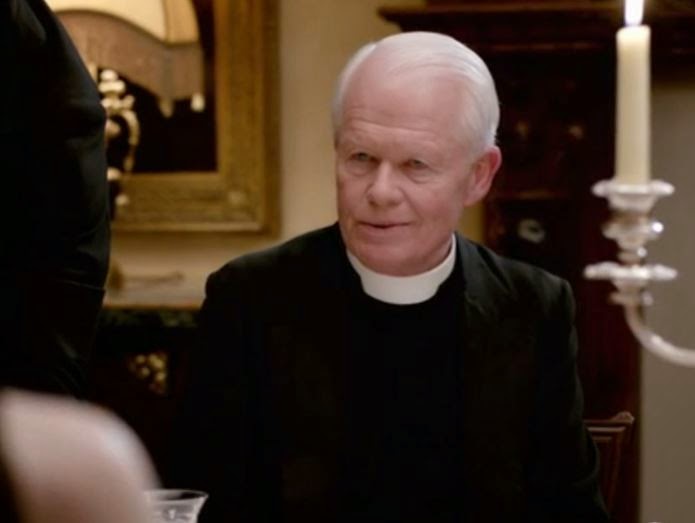 Another familiar face, equally often seen with a villainous sneer as with a cheerful grin. Michael Cochrane's expressive mouth and narrow eyes, combined with his suave manner, have seen him cast in a range of upper-class roles over the years. Seemingly able to convincingly embody the quick-tempered brooding bully or the likeable silly ass, he has appeared in a long list of popular British TV dramas over the years, from 'The Pallisers' in the early '70s, to its modern counterpart 'Downton Abbey'.
After 'The Pallisers', another early success came with the popular WW1 drama 'Wings' following the early days of the Royal Flying Corps, in which he played young officer Charles Gaylion. Throughout the '80s and beyond, he was ubiquitous in quality TV drama such as 'The Life & Times Of David Lloyd George', 'The Citadel', 'The Far Pavilions', 'Nancherrow', and 'Holy Flying Circus' in which he played Malcolm Muggeridge. Cult TV fans will clock him in two 'Doctor Who' stories from the '80s - and Radio 4 stalwarts will know his voice as that of permanently exasperated country gent Oliver Sterling from 'The Archers'.
More lightweight fare includes 'Jonathan Creek', 'Spooks', 'Pie In The Sky' and a briefcase-full of police procedurals, whodunnits and courtroom dramas. The comedy strand is a decently varied collection stretching from 'The Two Ronnies', 'Shelley' and 'To The Manor Born' to 'Keeping Up Appearances', the Ardal O'Hanlon sitcom 'Big Bad World' and even an episode of 'Love Thy Neighbour'.

His most recent recognition has come through 'Downton Abbey' in which he plays the enthusiastically Anglican village vicar, Reverend Travis. 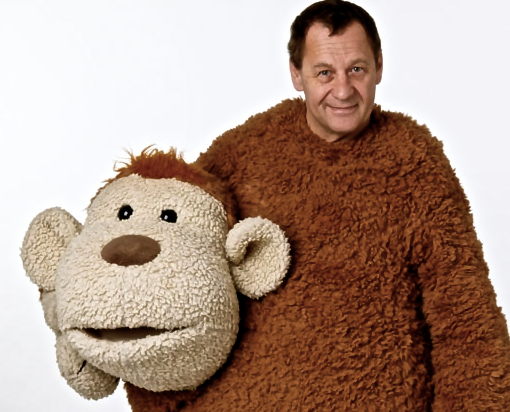 The go-to guy for gorillas in the British film industry, Peter Elliott is one of the world's most accomplished animal actors, specialising in the movements of apes and ape-like creatures.


He's also been in Red Dwarf as a chimp and he played Bollo the gorilla, from 'The Mighty Boosh' - but only in the episodes set in Dixon Bainbridge's zoo.

Posted by fiftywatts at 17:45 No comments: 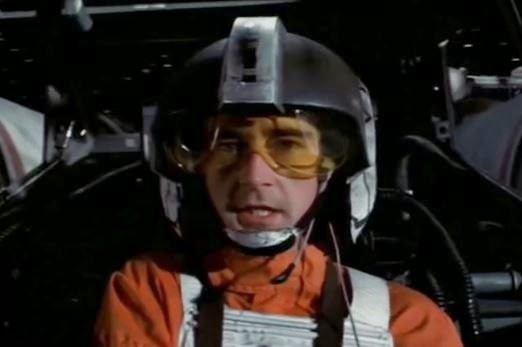 Compact and suavely handsome in a slightly weasely way, Scottish actor Denis Lawson is a stalwart of British television, but probably known only to the wider world - or the nerdier portion of it - as Wedge Antilles, one of the heroic X-Wing pilots of the original 'Star Wars' trilogy. Extra galactic trivia points are doubtless also accrued by being the uncle of Obi Wan Kenobi, Ewan McGregor.

Up until 'Star Wars' (1977) or whatever they call it now, he had been in an interesting grab-bag of serious drama, typified by the televised version of the NT 'Merchant of Venice' with Laurence Olivier, late night plays like 'Ms Jill or Jack' and 'The Paradise Run', and middle-brow TV hits like 'Survivors', and 'Rock Follies'.

﻿
The '80s were a bit of a boom time and he appeared in memorable stuff like the quirky time-travel TV play 'The Flipside of Dominick Hyde' and the prescient neo-noir conspiracy crime serial 'Dead Head' as well as getting the starring role in the lightweight sitcom 'The Kit Curran Radio Show'.

There was also some day-to-day drama and comedy to fill the diary too, 'Boon' and 'Bergerac', 'Robin Hood' and 'Miss Marple', and 'The Good Companions' and 'Victoria Wood: As Seen On TV'. More recently, he had the key role of Jarndyce in the BBC's adaptation of 'Bleak House', as well as major parts in the ghost tale 'Marchlands', 'Criminal Justice' and now 'New Tricks'. I also enjoyed the bleak slapstick of the 'Inside No 9' episode where he played the victim of Shearsmith and Pemberton's hapless art thieves.

Aside from the George Lucas gigs, his film credits include a rare Scottish part in 'Local Hero' (1983) and Jack Rosenthal's clever class vignette, 'The Chain' (1984). He also appears alongside his nephew in 'Perfect Sense' (2011), an example of that under-represented genre, romantic Scottish epidemic-apocalypse sci fi.