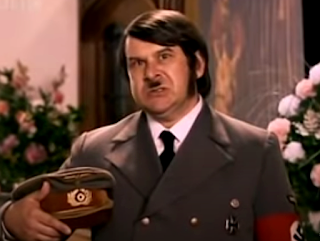 Expert comic foil Paul Putner is a somewhat familiar face, at least in the edgier realms of UK television comedy. You may have seen him in shows with the likes of Kevin Eldon, Peter Serafinowicz, Lee & Herring, Lucas & Walliams, and the Comedy Lab.

In the early '90s, LAMDA graduate Paul Putner was part of the comedy team at London's easy-listening revival hotspot The Regency Rooms, with kitsch crooner Lenny Beige and Co. A meeting of minds with Richard Herring seems to have led to a rich seam of semi-straight-man roles in TV as the fringe comics were snaffled up by the networks. He's also a successful comedy writer with credits in TV and radio.

He can be spotted in 'The Glam Metal Detectives', 'Murder Most Horrid', 'This Morning With Richard, Not Judy', '15 Storeys High' and 'Spaced', as well as Peter Serafinowicz's eponymous show and his cult hit 'Look Around You', not to mention 'Little Britain', 'It's Kevin', and 'Stewart Lee's Comedy Vehicle'.


More conventional TV fare includes 'The Bill', 'Foyle's War', 'Midsomer Murders', 'Downton Abbey' and the '60s-set 'Only Fools and Horses' prequel 'Rock and Chips'. All in all, a pretty decent collection of comedy connections and a likeable screen presence - so hopefully this little salute has done something to elevate him above 'that bloke' status.

Edit: And the more I find out about Mr Putner, the more I like him. Here's a link to a rummage through his excellent-looking record collection.