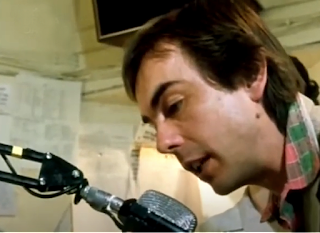 You will almost certainly have your familiar buttons pushed by British actor David Sibley. He  has appeared in a very solid set of UK television favourites over the years, starting with 'Survivors', the prescient disease drama of the '70s. Another important supporting role was in the very popular First World War series 'Wings', following the development of the Royal Flying Corps through a compelling narrative of character and class clashes, lost youth and authentic aerial sequences.


Some of the big-name successes that he has been associated with more recently include 'Downton Abbey', 'Silent Witness', 'Broadchurch' and 'Wallander', alongside some choice period TV dramas such as the 1998 BBC 'Middlemarch', 2013's 'War and Peace' and the star-studded 2018 'Vanity Fair'.

In his youth, his somewhat elfin combination of mysterious hooded eyes and perky chipmunk-ish smile led to a few interesting TV roles, and as he has matured, this appealingly ambiguous side to his appearance and performances has obviously caught the eye of casting directors. His characters turn up in many popular detective and light mystery programmes, such as 'Ruth Rendell Mysteries', 'Shoestring'(memorably playing a mild-mannered psycho), 'Midsomer Murders', 'Alleyn Mysteries', 'Frontiers' and 'Judge John Deed',  but he's also in some of our old favourites like 'Minder', 'Blakes 7' and 'Dr Who'.

Naturally, he has been ingested by the great long-running drama monsters; 'Holby City', 'Casualty', 'Doctors', The Bill' etc, but keep an eye out for him in the long-ignored LWT drama series 'Rooms', currently (late 2020) getting some airtime on the Talking Pictures channel on British TV.

All in all, a solid all-rounder and a bit more.