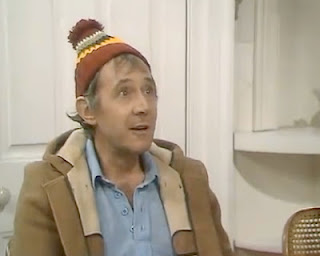 
Strange, impish character actor with a distinctive 'halting and blinking' delivery. He trained at RADA, which may account for his ability to be memorable and compelling in a lot of fairly slight and minor roles. His star turn in the seemingly bland family sitcom 'Keep It In The Family' was notable for his portrayal of the childlike, manically depressed Dudley Rush - a comic-strip artist with a hinted history of breakdowns and mental issues who lives with his attractive, supportive wife (played by Pauline Yates, echoing her performance in 'Reggie Perrin') and pert grown-up daughters. He only draws when holding the pen with a glove-puppet lion... 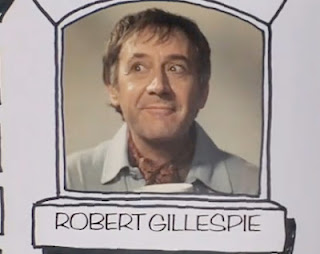 Other TV roles include the unhappy transvestite Mr Mince in the first episode of 'Agony', the fair-minded chairman of the residents association, Mr Carter, in 'The Good Life', and the long suffering police sergeant in 'Man About The House' who was to become a recurring character extending even unto the realms of 'George & Mildred'. His resume stretches back to the '60s, and includes comedy like 'Dad's Army', 'Up Pompeii', 'Porridge', 'Rising Damp' and 'The Liver Birds'. There's a smattering of cult classics too: 'The Avengers', The Sweeney', 'Doomwatch', 'The Survivors', and the rather forgotten kids adventure series 'The Freewheelers'. 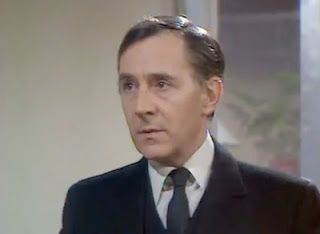 A scandal of some sort cut his on-screen career short in the '90s, but he is still acting and an innovative and successful director and writer for the stage.

But this is the good stuff, to my way of thinking: from 'Whatever Happened to The Likely Lads?'
Robert Gillespie - imdb profile