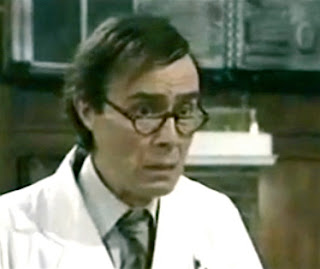 Lugubrious, skeletal actor, probably best known for his voiceover work, more specifically for being the voice of both Parker and Brains in Gerry Anderson's 'Thunderbirds', (not to mention Prof Matthew Matic in 'Fireball XL5' and Dr Beaker in 'Supercar'). This alone is obviously enough to guarantee him cult TV legend status, but he was also partly responsible for devising the voices of the Daleks in 'Dr Who' and providing them in more than 30 episodes, as well as appearances in a more dramatic vein such as the scientist Kerensky (pic above) in the Tom Baker-era story 'City Of Death'.
His television roles have also included classic '60s/'70s stuff like 'The Avengers', 'The Saint', 'Danger Man', 'Till Death Us Do Part', 'Callan', 'Timeslip' and 'Ace Of Wands'. By the '80s he was still cropping up in 'When The Boat Comes In' and 'Howard's Way' and has been seen in 'The Bill', and  'Doctors'.
As befits his exalted position as the voice of Brains, he also did a fine job portraying Einstein in the dramatic segments of the 2005 BBC 'Horizon' programme 'Einstein's Unfinished Symphony'.


Thanks to Richard Sanderson for the nudge.