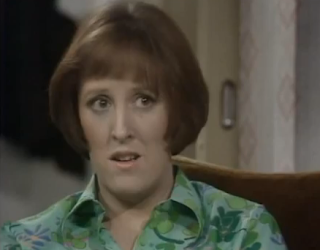 
Recently back on TV screens playing Liz Turner in 'EastEnders', she is still probably best known for the un-PC ITV favourite, 'Love Thy Neighbour' as Jack Smethurst's long-suffering wife, Joan, or possibly for her role in the Euston-films drama series 'Widows'. Film credits include 'Poor Cow' (1967), 'Melody' (1971), 'Til Death Us Do Part' (1969), and Jimmy's mum in 'Quadrophenia' (1979). My personal favourite might be her role as Blakey's nurse and girlfriend in 'Holiday On The Buses' (1973). It's probably not hers.

Footnote:
Incidentally, I was sure that she played Frankie Abbot's mum in 'Please Sir!' but that was the excellent BARBARA MITCHELL, who died in 1977. Sadly there isn't much on the internet about her, but she deserves a salute anyway.
http://www.kingstononline.co.uk/barbara-mitchell-actress/