The top ten greatest British character actors of all time?

I've chosen to leave out some of my all-time favourite actors from this list on the basis that they are bona fide 'film stars'. Otherwise I would definitely have had to find room for 'top billing' names like Alastair Sim, Terry-Thomas, Margaret Rutherford, Peter Sellers, Sid James and others of the golden era.

I've also excluded living actors who are already saluted elsewhere in this 'Familiar Unknown' blog, which cuts out the likes of Dudley Sutton and Aubrey Morris.

So here are ten actors who brighten any film when they unexpectedly appear in supporting roles, rather like bumping into an old friend in a strange town, or finding a tenner in your coat pocket.

On another day I might have picked a different ten. Where are Irene Handl, Thorley Walters, George Cole, Herbert Lom and Harry H Corbett? What about Roy Kinnear, Denholm Elliot and Ronald Lacey? Perhaps a top 100 is called for.

Whom would you have chosen?
Feel free to submit your own top ten in the comments box below. 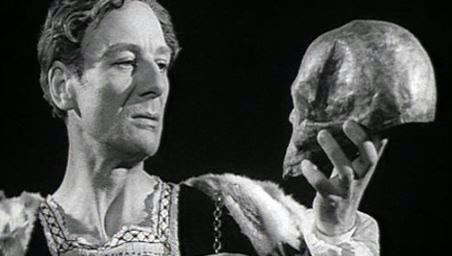 By way of a change, I thought I'd share a few of my favourite character actors who would certainly have been high on my list, but who fell outside of my self-imposed restriction of including only actors who are still alive (at time of writing at least - some of the posts on here have subsequently become obituaries - see Eric Sykes, Graham Stark, Ken Jones, Stella Tanner, Philip Madoc, et al).

Sykes and Stark are possibly more properly thought of as comedy stars than as 'mere' character actors, and there are a few more of their ilk gone since this started: Richard Briers, Clive Dunn, Frank Thornton, Roger Lloyd-Pack and Rik Mayall, for example, all of whom I'd have liked to have included even if they were not at all 'unknown'.

In any case, in belated tribute, here are some others who have sadly died since I started this project in April 2010, a few of whom I'd actually started to prepare as entries, but who passed away before I got round to them. 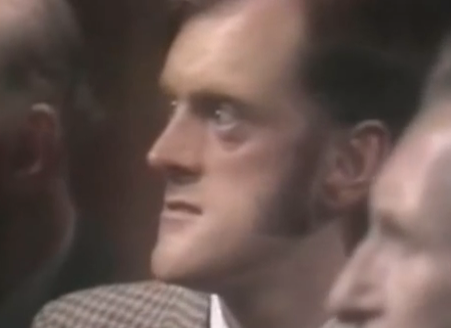 It seems that lanky, long-chinned actor John Owens has appeared in a lot of my favourite TV programmes over the years, but has always somehow flown just under my recognition radar. Looking at his resumé on the ever-useful imdb website, I notice that he has had a lot of no-name roles that suggest the fringes of extra-dom; 'waiter', 'salesman', 'man in cupboard', 'jumble donor' and quite often 'vicar'. This does him little justice.

He's in one of the most classic of 'Doctor Who' stories for a start, 'The Daemons' from 1971 (see picture at top of page), as well as classic serials 'Nicholas Nickleby' and 'Sense and Sensibility', period dramas like 'To Serve Them All My Days', 'The Rivals of Sherlock Holmes' and 'The Monocled Mutineer'. You might also catch a glimpse of him in lots of popular early-evening stuff like 'Lovejoy', 'Shoestring', 'The Professionals' and 'Reilly Ace of Spies'.

Plenty of comedy too. He was a regular on 'The Dick Emery Show' and 'The Two Ronnies' (in fact, he works the slightly weak visual punchline of the famous 'four candles' sketch) plus a sprinkling of sitcoms that includes 'Terry & June', 'Whatever Happened to the The Likely Lads', 'Please Sir', 'Potter', 'Rosie' and 'Rings On Their Fingers'. And some of the more whimsical and sophisticated '70s and '80s offerings, such as 'Fairly Secret Army', 'Mister Pye' and 'Mapp & Lucia', before brushing with alternative comedy, satire and dark humour via 'The Young Ones', 'Time Trumpet', 'Look Around You' (as Teddy Clarke, leader of the vegetable orchestra) and 'Nighty Night'. 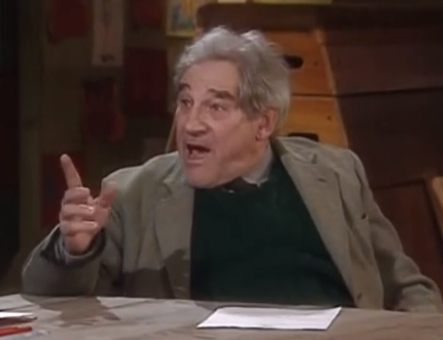 In the early days he seems to have knocked about Tin Pan Alley with RADA-trained 'Oh Boy!' producer Jack Good and the early stars of the British rock'n'roll scene.

He is credited as a scriptwriter on 'Six Five Special', 'Oh Boy!' and the less well remembered 'Wham!'. When Jack Good put together the 'Around The Beatles'  TV special in 1964, he got Peacock to lead the Fab Four in their Midsummer Night's Dream skit. And not many people know that Trevor Peacock wrote the winsome pop novelty 'Mrs Brown You've Got a Lovely Daughter', later a hit for Herman's Hermits, as well as Billy Fury's 'Stick Around', and the lyrics for the vocal numbers on the 'Beat Girl' (1959) soundtrack.

On TV, he was in a number of serious dramas and classic serials: 'Edward VII', 'The Borgias', 'The Old Curiosity Shop' (as Quilp, BBC 1979), 'Henry VI', 'Pericles', 'Titus Andronicus' and Neil Gaiman's 'Neverwhere', but was also seen in comedy shows ranging from 'Father Dear Father' to 'The Smell of Reeves and Mortimer'. Not forgetting the dipsomaniac human cannonball, Captain Zero, in 'Last of the Summer Wine'.  The pre-Dibley mainstay has been from the better end of popular primetime drama. See for example 'Minder', 'Boon', 'Underworld', 'Van Der Valk', 'Lytton's Diary', 'Jonathan Creek' and so on.
﻿﻿﻿﻿
On the big screen, a few fleeting glimpses: 'Hamlet' (1990) as the gravedigger, 'The Trial' (1993) prosecuting Anthony Hopkins as Joseph K, 'Sunshine' (1999), and 'Fred Claus' (2007). A couple of London-centred films sound really interesting, but I don't know if they are available these days, 'The Barber of Stamford Hill' (1962)* and 'Tersons Were There' (1967). Any information gratefully received.  ﻿﻿


Trivia: When he appeared on 'The Smell of Reeves and Mortimer', he played a Vox Continental organ while wearing a red catsuit in Uncle Peter's Band.

The father of Daniel Peacock. And Harry Peacock - best known as Ray Bloody Purchase from 'Toast of London'.

* You can now watch this little gem on the BFI website. 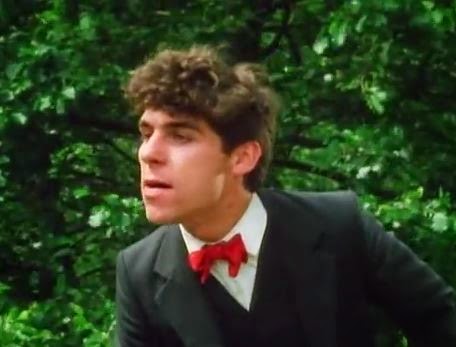 An actor often associated with the energetic, twitchy delivery much in vogue in the youth theatre of the '80s, Daniel Peacock has played brash, belligerent and brainless characters, mostly in the worlds of comedy and children's TV. Early film appearances in 'Quadrophenia' (1979), 'Porridge' (1979) and 'Gandhi' (1982) were followed by a rich seam of films springing from the alternative comedy scene through the '80s, including: 'Party Party' (1983), 'The Supergrass' (1985), 'Eat The Rich' (1987), 'Whoops Apocalypse' (1988), and the misjudged alt-com shipwreck, 'Carry On Columbus' (1992).


On TV, he balanced a close relationship with the Comic Strip crowd with a steady stream of parts in more mainstream comedy. He was in 'The Young Ones' and some of the most memorable 'Comic Strip Presents…' episodes, notably the spoof 'Famous Five' trilogy 'Five Go Mad In Dorset', 'Five Go Mad on Mescalin' and the recent reunion 'Five Go Mad in Rehab', in which he reprised his Toby Thurlow role. He was also in 'Strike', 'The Beat Generation', and 'A Fistful of Travellers Cheques'.


Meanwhile, he cropped up in the likes of 'Only Fools and Horses', 'Birds of a Feather', 'The Kenny Everett Television Programme', 'One Foot in the Grave' and the very weak and silly sketch show 'Assaulted Nuts' with Tim Brooke Taylor and Cleo Roccos. He wrote and appeared in 'Men of the World', a strangely old-fashioned sitcom set in a travel agency, which starred John Simm and David Threllfall. There has also been some light drama, ranging from 'C.A.T.S Eyes', 'Casualty' and 'The Bill' to 'Shine On Harvey Moon', 'Boon' and 'Doctor Who'.


Children's television, both as an actor and a writer, takes up a good bit of his CV and runs from traditionally jolly fun like 'SuperGran' and 'Mr Majeika' to a string of more zany and irreverent kids' series which reflect his old Comic Strip connections, such as 'Teenage Health Freak', 'Billie, Girl of the Future' and 'Demolition Dad'.

An oddity is the ultra low-budget comedy horror 'I Bought a Vampire Motorcycle' (1990) which was apparently produced and shot by the cast of 'Boon' (Neil Morrissey, Michael Elphick, etc) during gaps in shooting and using many of the same locations. Peacock makes a pretty revolting appearance as a demonic talking turd. 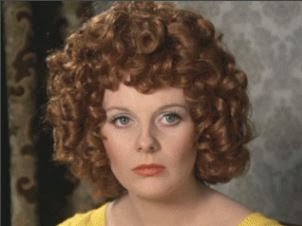 
Probably still best known from the ever-popular screen version of 'Oliver!' (1968) in which she played Nancy's good hearted friend Bet, the name of pretty and talented actress and singer Sheila White is not as familiar as perhaps it should be.

On TV, there is high-end popular drama like 'I, Claudius', the pre-raphaelite artists bonkbuster 'The Love School' and 'Poldark' alongside a good mixture of lighter fare, variety and comedy. She was quite memorable as Arthur's singer protégée in 'Minder', and is credited as originating the Rodney Bewes comedy series 'Dear Mother... Love Albert' in which she also starred for a couple of seasons. To this, add boatyard sitcom 'Don't Rock The Boat', the Paul Shane talent agency comedy 'Very Big Very Soon' and a brief stint in 'EastEnders' as adopted Sharon Watts's hard-hearted birth mother, Carol.


She also had a bit of post-'Oliver!' success in France as a pop star in the clean-cut Pet Clark mould. Check her out in this Gallic TV curiosity. My Tailor is Rich.   (Apparently, that's the first phrase you learn from an English textbook in French schools.)

*As of Sep 12, 2018, Sheila White's passing has not been notified to the press/imdb/wikipedia, but the sad news has been confirmed by her agent. 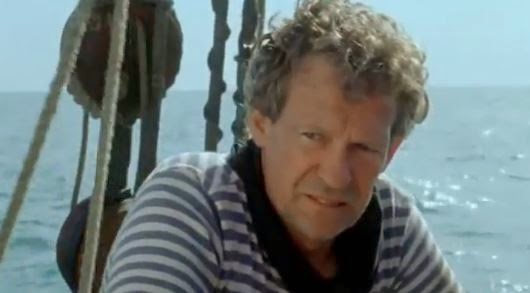 Ubiquitous and adaptable Yorkshire actor with a gentle, burry voice, massively in demand for his ability to convince in roles ranging from the jolliest of uncles to the grimmest of villains, in everything from suburban sitcoms to heavyweight period drama. One of his biggest recent jobs has been playing Mr Mason, one of the few likeable characters in  'Downton Abbey', but his television CV from the early '70s to today is quite exceptional in its scope and quality.


As well as 'Downton', he pops up in some other flag-waving series of the British television renaissance of the last decade, like 'Life on Mars', Torchwood' and 'Shameless'. And picking a few TV highlights from further back, you'll see him in Alan Plater's Chaucer-goes-Rugby-League series 'Trinity Tales', the Ben Kingsley 'Silas Marner', the 1977 BBC 'Treasure Island', the influential 'Cracker', 'Queer as Folk', 'The Lakes' and as the irascible seaman Matthews in the long-running 'Hornblower' franchise (photo top).

A quick run-down of his more everyday appearances would include everything from 'Tenko' and 'Secret Army' to 'Minder' and 'Strangers', with the inescapable cop and hospital stuff such as 'Heartbeat', 'Holby City', 'Peak Practice', 'Casualty', 'The Bill' and 'Doctors'.

In the movies, his younger days saw him cast in war movies 'A Bridge Too Far' (1977) and 'Zulu Dawn' (1979),  the controversial TV movie 'Death of a Princess' (1980) and later a supporting role in 'The Remains of the Day (1993). He has appeared in a number of shorts and low-budget films, including 'The Day My Nan Died' with Alison Steadman and Deddie Davies.


Trivia: Fans of kids' TV might remember him from the spooky 'Ghost In The Water' which is now apparently lost to posterity, 'Gruey', 'Grange Hill' and a few schools' programmes.

He also provided the voiceover for the horrible bleach-sloshing paranoia fest 'How Clean Is Your House?'.