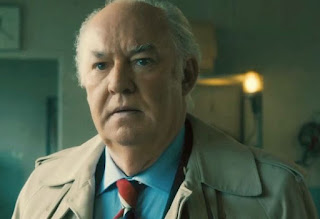 Super-familiar, classically-trained, all-purpose character actor, perhaps bearing a resemblance to the late Iain Cuthbertson. You might have seen him - in fact it would have been hard to avoid him - in a raft of popular light-middleweight cop and spy dramas over the last four decades. Consider the likes of 'Bergerac', 'Midsomer Murders', 'Dalziel & Pascoe', 'Spooks', 'Heartbeat', 'Boon', 'Widows', 'Widows 2', 'New Tricks', etc, and perhaps better stuff such as 'Cracker', 'Waking The Dead', the oddball sci-fi drama 'Utopia', and the 1981 precursor to the Alan Plater's Beiderbecke trilogy, 'Get Lost', with Alun Armstrong.

He also had the lead role in the late-'80s sci-fi serial 'Star Cops' which has become a minor cult phenomenon in some corners of the internet, although it failed to catch on with a wider audience. He's never done a 'Doctor Who' though, something of a rarity for these pages.

As a TV comedy fan, you might have spotted him in the supermarket-set 'Trollied' or in the Greg Davies vehicle 'Cuckoo', or perhaps 'The New Statesman' or 'The Wrong Mans', but that seems like a minor section of his CV.

By way of consolation, here he is brazenly impersonating a Crime Prevention Officer in a Public Information Film, using an intermittent all-purpose reassuring Northern accent.