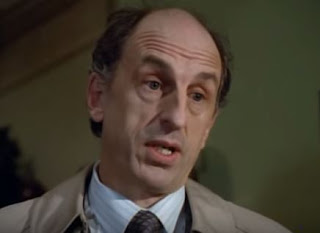 Distinctive beaky character actor who crops up in a lot of popular TV from the '70s onward... That's how I would usually kick off one of these little salutes to a character actor, peppering the entry with references to popular cultural touchstones, perhaps TV favourites such as 'The Sweeney', 'Pie In The Sky' or 'The Bill', or marginal roles in popular movies like '1984' (1984), 'Raiders Of The Lost Ark' (1981).

I get the feeling, though, that Matthew Scurfield has some more interesting stuff going on.

He certainly has popped up in a bunch of that stuff, but the more I find out about him, the more interesting he seems. I could list a lot of middling '70s-'90s sitcoms and prime-time dramas from 'C.A.T.S. Eyes', 'Wycliffe'  and 'Boon' to 'Ripping Yarns', 'The Hitchhiker's Guide To The Galaxy' and 'Educating Marmalade'. Like some other British character actors, he was also rounded up for 'Game Of Thrones'.
Brought up in an academic household but encumbered with undiagnosed dyslexia, he has tracked back and forth across high, mid and low-brow culture, from hanging out with Syd Barrett and Steven Berkoff to appearing in 'The Bill' and 'Coronation Street'.

Perhaps a better idea of the man comes from his pre-professional outing in the art school project 'Lone Ranger' (1968) - Storm Thorgerson and Alfreda Benge were also involved - a slightly rambling affair as you might imagine, but worth having a look at [you can see it here].


Still acting, but these days he is principally a counsellor based in Malta. His autobiography 'I Could Be Anyone' looks to be well worth investigating. 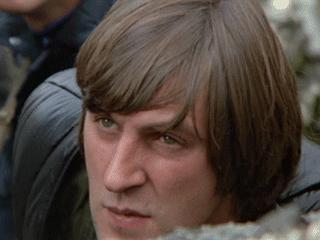 This imposing Liverpudlian actor - the older brother of Michael Angelis of 'Liver Birds' fame -  hit our screens a number of times in the '70s and '80s, but had been quietly making his substantial presence known for some time before that. He voiced both Ringo and George, and the Chief Blue Meanie, in the animated Beatles romp 'Yellow Submarine' (1968), for example, and took the randy Scouse git role for the painful but fascinating 'Alf Garnett Saga' (1972) - a grim, barely satirical, document of the sexism and racism of the times. He also appears briefly in the quirky 'Otley' (1968) with Tom Courtenay.


His first regular TV role was as PC Bannerman in the popular cop drama 'Z-Cars', but he swiftly racked up an impressive roll-call of appearances in '70s favourites such as 'Callan', 'Softly Softly', 'The Onedin Line', 'Man About The House', 'Porridge' and 'The Sweeney'. He also appears in some of the more adventurous drama of the period, such as 'Armchair Thriller' and the 'Thirty-Minute Theatre' play 'Under The Age' as Susie, pushing the envelope as a transexual bartender in an edgy piece of TV theatre.


As TV lost that edge in the '80s, Angelis found roles in the likes of 'Bergerac', 'Boon', 'Tucker's Luck', 'The Gentle Touch' and 'Juliet Bravo', as well as soap opera duties into the '90s with 'Coronation Street', 'EastEnders' and 'Brookside'. While later film work included the Helen Mirren vehicle 'Hussy' (1980) and playing a Bond baddie in 'For Your Eyes Only' (1981).


The familiar round of latterday TV includes the usual suspects, 'The Bill', 'Casualty' etc, before tapering off in the early 2000s. It seems that he has also written plays and possibly a novel, although I haven't been able to track one down. Still, good stuff all round. 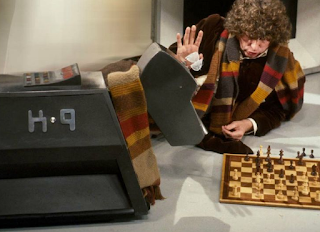 John Leeson is best known as the voice of K-9 in 'Doctor Who' (and latterly, 'The Sarah Jane Adventures'), although two other actors have stepped in on occasion to play the mechanical mutt.

Some still feel that the idea of a clunky fibreglass-shelled robo-rover - complete with vintage '70s computer font branding - could drag the nation's favourite sci fi serial perilously close to 'Metal Mickey' territory, yet he seems to be generally accepted by fans, even popping up to add some knowing nostalgia to the show in the David Tennant era.

Those who want to spot John Leeson when not acting through an electronic prop have a difficult task, but he has popped up in a few TV bit parts over the years, starting in the late '60s. As Victor, for example, Timothy's librarian mate in 'Sorry', and a smattering of background characters in anything from 'Take Three Girls', 'The Barretts Of Wimpole Street' and 'Vanity Fair', to 'Minder', 'Allo Allo', and 'Tucker's Luck'.

He made a convincing petty official and was quite likely to appear with a clipboard to infuriate and bewilder unwitting victims on 'Beadle's About'.

He's in feature films 'Tarka The Otter' (1979) and 'Whoops Apocalypse' (1988) was also the actor in an early version of the Bungle bearsuit in the children's TV show 'Rainbow' for a short while in 1972. 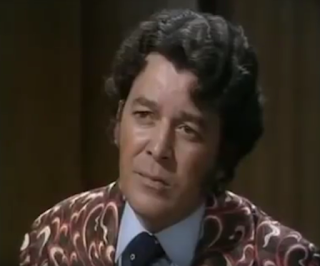 Edward De Souza:
Debonair De Souza approached male lead status in the early '60s, appearing in the Hammer films ‘The Phantom of the Opera’ (1962) and ‘The Kiss of the Vampire’ (1962), followed by 'Jules Verne's First Men In The Moon' ( 1964), but somehow he missed that particular boat and moved into character roles, in which he has been a consistent fixture across more than five decades.  There have been a number of relatively high profile film appearances. In 1977 he played Sheik Hosein in the James Bond film The Spy Who Loved Me' and is seen in the fantasy drama ‘The Golden Compass’ (2007).

Television, however, has been his bread and butter, with comedy playing a surprisingly large part. From 1961 to 1966, he starred in the sitcom 'Marriage Lines' with Richard Briers and Prunella Scales.  de Souza played the role of Afonso in One Foot in the Grave One Foot in the Algarve (1993). He also appeared in 'Not In Front Of The Children' with Wendy Craig, as well as the underrated office comedy, 'The Squirrels' and the television version of 'After Henry' (1989–90).

In TV drama, he was solicitor Bonny Bernard in the first series of ‘Rumpole of the Bailey’ (1978), and in 1982 he appeared in the final ‘Sapphire & Steel’ adventure as "The Man". Farrington. Earlier, he took the part of Soveral (the Portuguese Ambassador to Britain) in ‘Edward the Seventh’, and joined the British soap opera Coronation Street as Colin Grimshaw, in 2008 and 2009. To this we can add a sprinkling of cult fodder stretching from 'The Saint', 'The Avengers', and 'Department S' to 'Strangers' and 'The Sweeney'. Latterly you might catch him in 'Doctors', the 2012 version of 'The Borgias', or 'New Tricks'.


Trivial treat: In 1965, he appeared as the lead in the Doctor Who story Mission to the Unknown – the only story ever broadcast in the series not to feature the Doctor in any capacity. He took on Valentine Dyall’s trademark role as the ominous sounding 'Man in Black' on BBC Radio 4 between 1988 and 1992.

Email ThisBlogThis!Share to TwitterShare to FacebookShare to Pinterest
Labels: Avengers, Coronation Street, Department S, Doctor Who, Edward De Souza, Hammer, Kiss of the Vampire, Man In Black, One foot in the grave, Rumpole, Sapphire & Steel, Sweeney, The Spy Who Loved Me, Wendy Craig 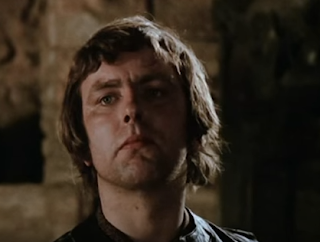 Here's an actor that hasn't been seen on our screens for for a while. According to imdb, his last appearance was as long ago as 1984. His petulantly boyish looks led to a series of roles of the edgier villain or unstable henchman type, perhaps something in the manner of a Ronald Lacey.

Television appearances include some ever-popular '60s and '70s franchises: 'The Avengers', 'Hadleigh', 'The Persuaders', 'Warship', 'Z-Cars' and 'The Sweeney'. He's also in the acclaimed Dennis Potter BBC Wednesday, Play 'The Beast With Two Backs'. For some reason he seemed to fade away from our screens in the '80s, and although he was describing himself as an actor/writer to Companies House in 1995, there's not much in the way of internet clues as to his later work. Still, let's salute him here. 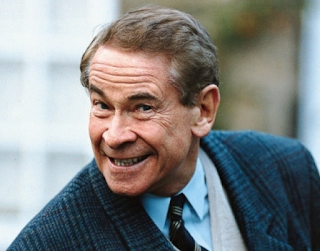 Yes, he's hardly 'unknown' - in the UK at least. In fact the impish Scottish actor Stanley Baxter is virtually the last man standing of the golden era of British film comedy, alongside his old sparring partner Leslie Phillips. In films produced by the film company Independent Artists, Baxter played a series of characters whose indignant innocence and highland integrity was set off against Phillips's casual caddishness. In 'The Fast Lady' (1962) and 'And Father Came Too' (1964) their rivalry was played out under the critical eye of the great James Robertson Justice. In these he made a likeable, if rather unlikely, male lead - winning the girl through dogged virtue rather than matinee-idol dash.

In 'Very Important Person' (1961) and 'Crooks Anonymous' (1962) the emphasis was more on his vaudevillian skills of comic characterisation, in which he was considerably more nuanced than, say, Norman Wisdom, but not as sophisticated as Peter Sellers. To me, his craggy features and mischievously mobile expressions gave him a rather sinister quality, particularly in drag. His love of the dressing-up box was later to become the raison d'etre of his television sketch shows.

By the later '60s and early '70s, the light family comedies had been brushed aside by smuttier Carry-Ons and the horror boom and television became his natural domain, although it always seemed that his audience was an older one. The shows featured some memorable skits, particularly his long-running 'Parliamo Glasgow' language course routines which offered an early observational take on the peculiarities of Scottish culture, later taken up by Billy Connolly and the 'Rab C Nesbitt' series. Other sketches, however, tended towards overlong costume pieces with the spectacle of a gargoyle-like Baxter in elaborate drag as a series of Hollywood actresses proving not all that funny. Especially if you were a ten-year-old who didn't know his Ethel Mermans from his Rita Hayworths.


His regular shows became less regular, eventually just an annual Christmas special, but there was a final flourish as the Andy Warhol-meets-Patrick Troughton children's TV star 'Mr Majeika' in the '80s before he settled down to national treasure status. Born in 1926, he's now in his nineties and hopefully going strong. 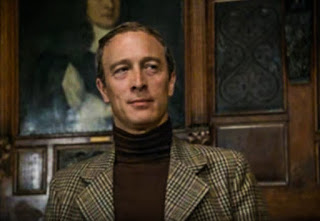 Now here's a face of the seventies, a lean, shrewd-looking actor who carved his name into a swathe of memorable roles through the heyday of popular television, yet without quite becoming a star.

He's another of that dwindling band of actors whose careers straddle the cult TV years of the '60s and '70s, when he appeared in 'Maigret', 'The Avengers', 'The Plane Makers', 'Man In A Suitcase', and 'Space:1999', and more mature roles in dramas such as 'Within These Walls', 'Doomwatch', 'Churchill's People' and 'Warship'. Perhaps his highest-profile part was in the very popular 'Secret Army' as the comparatively sympathetic German officer Brandt who tempers some of the Nazi fervour of his Gestapo counterpart Kessler (played by Clifford Rose). Younger viewers at the time would probably associate him more with 'The Adventures Of Black Beauty'.

The later '70s and early '80s kept things nicely on the boil with appearances in favourites like 'The Sweeney', 'Minder', 'Squadron', 'Hammer House Of Horror', 'The Adventures Of Sherlock Holmes', 'Boon', 'The Professionals' and 'Shoestring'.

Then there's the cinema CV, which contains some pretty impressive titles, kicking off with (uncredited) roles in 'From Russia With Love' (1963) and 'Thunderball' (1965), and including 'A Passage To India' (1984), the Peter O'Toole 'Goodbye Mr Chips' (1969). As with many British character actors, though, he is known throughout geekdom for his brush with the Star Wars franchise, in this case as Captain Needa, another imperial officer who gets on the wrong side of Darth Vader.