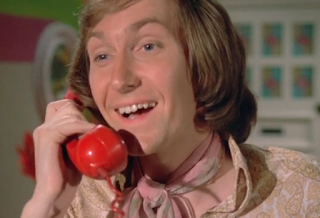 The '60s were remarkable years, fizzing with possibilites, of sudden opportunities and lingering disappointments. Christopher Sandford's story is fascinating in the way it touches obliquely on some pivotal pop-culture moments. Without knowing it, I'd watched him in a number of my favourite films and television programmes, without a glimmer of recognition or connection.

Early roles as a teenager included a few TV shows, mostly now lost, and typical light comedies such as the inevitable cruise-ship romp 'Next To No Time' (1958) with Kenneth More and Sid James, and the equally inevitable schoolboy hi jinks of 'A French Mistress' (1960), with James Robertson Justice. But it was his role as Walter Potts, the gormless window cleaner of 'Coronation Street' that brought him to the public's attention. In 1963, as Beatlemania was gathering momentum, the primetime soap's storyline saw Walter transformed into "Brett Falcon" by would-be impresario Dennis Tanner. This neat TV-pop crossover even resulted in a flurry of real-life singles on Decca and Fontana.


He appears in several episodes of 'Danger Man', notably as a Arthur the departmental boffin and as a DJ/agent on a pirate radio station in 'Not So Jolly Roger'. He seems to have been ticking along nicely with the odd part in popular shows of the time, including 'Z-Cars', 'No Hiding Place', 'Public Eye' and 'The Saint'. He also appears in 'Half A Sixpence' (1967) as Tommy Steele's mate Sid, and the BBC adaptation of Dickens's 'Dombey & Son' from 1969.


The '70s presented a new landscape. Sandford's swinging London pop-persona was in demand, but looking increasingly outré in the new decade. He appears in full comedy-mode in 'The Persuaders' Ealing-esque episode 'A Death In The Family' as Roger Moore's groovy duffer of a cousin. On the darker side, he turns up as the brilliantly-named depraved pornographer David Thing  in "Cool It Carol' (1970) a rather grimy, if moralistic, sexploiter with Robin Askwith.

Darker still is his slightly chilly turn as Sue's fiancé in the marvellous 'Deep End' (1971), and another rather grim gooseberry role in the obscure Giallo-style 'Die Screaming Marianne' (1971).

The remainder of the '70s saw relatively few highlights, and in fact there are only six entries on imdb covering the period from 1975 to 2006. He also returned to music with a couple of pastiche comedy records. A modest claim to fame comes from his appearance in the 'Dad's Army' episode 'Time On My Hands' as the German airman dangling from the Walmington-on-Sea town hall clock. 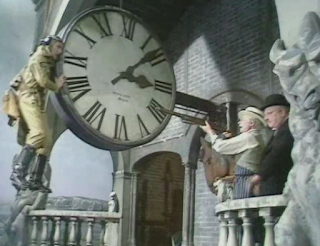 A mixed bag, but some real gems, some terrific oddball stuff and a fascinating story.