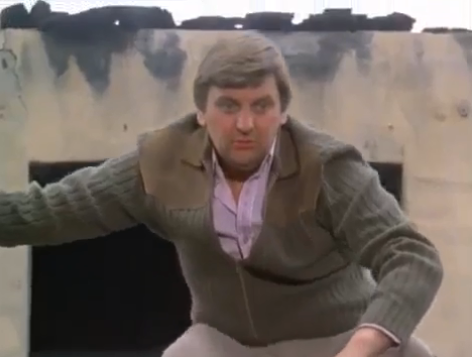 Despite having little formal drama training, Londoner Derek Martin has been ubiquitous in no-nonsense roles across British television for decades. Leaving his job at Smithfield meat market and starting as a stuntman and extra, he soon proved to be more than capable with dialogue and gradually built a reputation as reliable casting for heavies, coppers, soldiers and security guards.

An idea of this trajectory can be seen from his long involvement with 'Doctor Who'. Cast in no fewer than nine adventures from 1965 onwards, he was an uncredited extra until 1977's 'The Curse Of Fendahl'. A conscious decision to move away from stunt work and into speaking roles paid off after much effort and application. The long upwards haul included appearances in 'No Hiding Place', 'Adam Adamant Lives!', 'Z-Cars', 'Softly Softly', 'Terry & June', 'Hart To Hart' (an episode shot in London), 'Target', 'Shoestring', 'Private Schultz', 'Minder' and 'Angels'.

A TV stalwart and deserving of a salute.