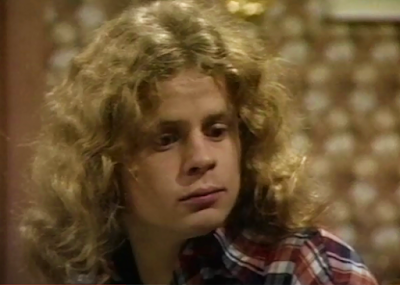 An angelic jack-the-lad type of the '70s variety, Michael Deeks got a taste of the big time playing Swiftnick in the well-crafted and very popular teatime series 'Dick Turpin', an excellent comic foil and sidekick to Richard O'Sullivan in the lead role. Prior to that he had been seen in a few small roles in the early and mid-'70s, including 'The Tomorrow People', 'Within These Walls' and the original BBC version of the Borstal drama 'Scum', although not the film remake.

With his mixture of wide-eyed innocence and puckish delinquency, Michael Deeks was cast in a variety of contemporary and period dramas, one of the more substantial of these was the intricate six-part Armchair Thriller story, 'The Circe Complex'. He plays prisoner Cat Devlin, persuaded to extract information from a fellow inmate, a canny jewel thief. He was also in a TV 'Hammer House Of Horror' and in the quite atmospheric TV play 'Tarry Dan Tarry Dan Spooky Old Man', which survives as a blurry YouTube video here.

Perhaps inevitably, with the passing of these twinkly teenage years, he found himself as just one of many young male actors competing for jobs, and the plum roles dried up. A definite prune was the annoyingly silly (even for an '80s  kids' show) 'Galloping Galaxies' in which he appears as a dim robot amid the usual slapstick and feeble jokes. Rather better were roles in 'Juliet Bravo' and that episode of 'Minder' where Mel Smith plays an unscrupulous pop manager faking his star's death.
He's in one of those star-studded corporate training videos made by John Cleese's Video Arts Ltd, but sadly it's rather hard to see these unless you're a corporation. And an amusing episode of the always decent 'Strangers', dealing with modern day highwaymen. But, after a single episode of 'The Bill', it seems that he retired from acting and became landlord of a pub in the home counties for a time.

In any case, a salute is due. Cheers and your very good health.