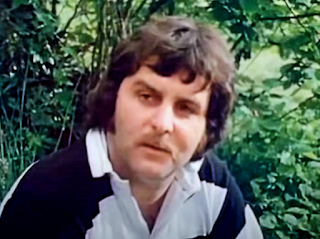 I thought I only knew Anthony O'Donnell as Ray, the camper unfortunate enough to pitch next to Keith and Candice-Marie in Mike Leigh's 'Nuts In May'. As is often the case, I came to realise that I had seen the compact Welsh actor in quite a lot more than that. And that's without taking into account his long and successful stage career with the National Theatre, the RSC and many other prestigious theatrical institutions, largely as I am not much of a theatre-goer.

'Nuts in May' in 1976 was, it seems, his first foray into television, and the remainder of the '70s saw only a few appearances, in 'The Onedin Line', 'Crown Court' and 'The Sweeney' for example, and you don't get much more '70s than that. There was also an attempt to launch him as a sitcom star in LWT's rather pedestrian 'Lovely Couple', penned by the screenwriter of the 'Confessions...' films, but I don't have any memory of seeing it, despite it reuniting him with 'Nuts In May' star Roger Sloman in several episodes.

Into the '80s and '90s and he was balancing an increasingly successful theatre career with the odd TV role. Memorable among these was the small but sinister gangster Big Dai in 'Minder', and some others such as the revived 'Tomorrow People', the vet series 'Noah's Ark', the Higson and Whitehouse one-off 'Dead At Thirty', and 'A Very Peculiar Practice'.

Meanwhile, back on the small screen, came appearances in 'The Sarah Jane Adventures' as the humorously belligerent alien, Kaagh, and a turn in 'Gavin & Stacey', as well as Ruth Jones's 'Stella', the period drama 'Twenty Thousand Streets Under The Sky', 'The Suspicions Of Mr Whicher', and the Jeremy Thorpe drama 'A Very English Scandal'. All good stuff.