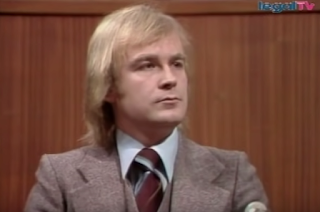 David Wood's innocent schoolboy looks, deployed so notably in Lindsay Anderson's remarkable 'If..' (1968), have stayed with him for his whole career. Which certainly isn't to say that he has been typecast, with an amazingly broad range of roles under his belt that show him hopping nimbly from outright menace to disarming sweetness with apparent ease.


In fact, it's in the field of children's drama and literature that he has made his most lasting impression: writing his own play for children, 'The Gingerbread Man', which he later adapted for television, and adapting a number of classic children's books for the stage. He proved a gifted storyteller on the much-loved BBC institution 'Jackanory' for  many years, and can be seen in episodes of schools programmes such as 'Watch' and 'Seeing & Doing' as well as tots' shows like 'Playaway'. He's also in the well-made children's serial, 'Huntingtower' from the late '70s.

While all this wholesome fare very much suited the David Wood who would later come to be dubbed Britain's Children's Dramatist, the darker side of '70s television drama also proved to be in search of his talents. He can be seen in the the Wednesday Play 'Mad Jack' about Siegfried Sassoon and the horrors of the trenches, in the feverish adventures of the Pre-Raphaelites in 'The Love School', and he's in episodes of those cult-favourite collections of the uncanny: 'Out Of The Unknown' and 'Menace'.
On the movie front, David Wood crops up in a few interesting titles, starting with the aforementioned 'If..' (1968), and including the psychological portmanteau horror 'Tales That Witness Madness' (1973) with Donald Pleasance, Robert Powell and Joan Collins. He's reunited with Malcolm McDowell in the 'Journey's End' adaptation, 'Aces High' (1976), and plays one of the baddies in 'North Sea Hijack' (1980) pitted against a bearded Roger Moore, throwing the kitchen sink at escaping his Bond persona with more bizarre quirks than he can realistically manage to pull off.


There's a smattering of period dramas, including Turgenev's 'Fathers And Sons' and Goldoni's 'The Venetian Twins' from the BBC, and the ambitious but slightly awkward 'Disraeli' with Ian McShane. He's in some old sepia-toned TV favourites such as 'Danger UXB', 'Enemy At The Door', and 'When The Boat Comes In'. A memorable moment for me is his tap-dancing martial arts duel with Purdey in 'The New Avengers', one of the few times when the series approached the surreal heights of its '60s ancestor. His last listed performing role was in the star-studded TV movie 'Longitude' in 2000, but David Wood is still seemingly busy with his work in children's drama, adapting Roald Dahl and other writers for the stage, publishing plays and books, and lecturing school drama classes. An engaging actor and a dedicated educator, deserving of this little salute and more.

Email ThisBlogThis!Share to TwitterShare to FacebookShare to Pinterest
Labels: Aces High, Crown Court, Danger UXB, Disraeli, Family At War, Huntingtower, If..., Jackanory, Out Of The Unknown, Tales That Witness Madness, The New Avengers