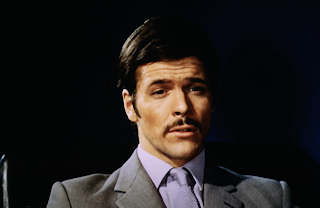 Robin Hawdon is probably much better known as a writer than as an actor, with his witty comedies - don't say farces - still widely performed all around the world. 'The Mating Game' was his first hit play, a smash in the West End with Terry Scott as the playboy with the gadget-packed apartment. 'Don't Dress for Dinner' is a later and even bigger success, set in a wealthy couple's French farmhouse retreat.

But I'd like to just give a little salute to Mr Hawdon's acting career before all that, a brief arc from uncredited obscurity to the lower stratosphere of sex symbol stardom.

With his effortless good looks, there were a few lightweight parts on offer, such as the the breezy 'We Joined the Navy' (1962) with Kenneth More, brooding crime stuff like 'Human Jungle', 'Suspense' and 'Armchair Mystery Theatre', and the semi-successful soap opera 'Compact'.

He plays Randolph the harp teacher in the millionaire segment of the fab 'Bedazzled' (1967), with whom Stanley Moon's beloved Margaret Spencer gets 'hot and sticky and.. Randy, we must have a swim'...

Television work around this time included 'Department S', 'The Adventurer' and 'Randall & Hopkirk (Deceased)' with the added bonus (for TV cultists) of an appearance in Gerry Anderson's 'UFO' as a Skydiver pilot. The remainder of the 70s saw a mixture of comedy and drama, but by this time the playwright was enjoying more success than the actor.

You can spot Robin Hawdon in dramas ranging from the BBC spy series 'The Man Who Was Hunting Himself'', to 'The Main Chance', the Victorian potboiler 'Wives & Daughters', and 'New Scotland Yard'.

There was some comedy casting too, 'The Frankie Howerd Confessions', 'The Liver Birds', 'Robin's Nest', and a leading role in Alex Shearer's 'Spasms' and the ensuing slightly misfiring series 'Chalk and Cheese' with Michael Crawford, in which he played the straight man to Crawford's proto-slacker. Maybe audiences found it hard to buy into a cynical man-of-the-world who still sounded a bit like Frank Spencer.  It wasn't a big success and the series ended in 1979, with Hawdon soon to forsake acting to concentrate fully on his writing career.


His later film career is also short but interesting. There was the shoddy and absurd 'sexy sci-fi' nonsense of 'Zeta One' (1969), with the unlikely mix of James Robertson-Justice and Charles Hawtrey and an invasion of alien pop-art dollybirds. Hawdon's turn as the male lead is workmanlike, given the circumstances, but also lacking in sparkle. The Hammer-produced prehistoric adventure 'When Dinosaurs Ruled the Earth (1970) is better, even with all its outrageous anachronisms, including immaculately coiffured and scantily furred cavewomen, never mind the Brontosauruses. At least there's Patrick Allen bellowing manfully and lots of primitive urges, even before you get to the stop-motion special effects of giant crabs and dinosaurs. These were good enough to see the film nominated for an Oscar, although it was beaten out in the end by 'Bedknobs and Broomsticks' (1970). Who knew?

Although it's his writing that has made his name and his money, that's an interesting CV of enjoyable performances. So, a salute, then. And well deserved.

Email ThisBlogThis!Share to TwitterShare to FacebookShare to Pinterest
Labels: Bedazzled, Chalk and Cheese, Department S, Frankie Howerd, The Day The Earth Caught Fire, The Mating Game, When Dinosaurs Ruled The Earth, Zeta One