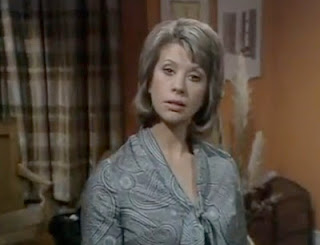 
A little bit of glamour now, of the wholesome British sort. The lovely Sheila Fearn, who managed to embody both confident sexiness and a down-to-earth mix of good humour and common sense. This impression probably stems largely from two of her best-known roles; as Terry Collier's sister Audrey in 'The Likely Lads' and as the witty and unaffected Anne Fourmile in 'George & Mildred'.

Other golden-era TV appearances include 'The Avengers', 'Z-Cars', 'Adam Adamant Lives', and even an episode of ' The Beverly Hilbillies' where they come to live in an English castle (it's one of the colour series from 1967, I don't know if it ever aired in the UK). She never seemed to hit the big time on the cinema screen, but her few minor roles are in some interesting films, such as 'Billy Liar' (1963), 'Catch Us If You Can' (1965), and an unusually unsympathetic turn as Kevin's mother in 'Time Bandits' (1981) alongside stalwart David Daker. In later years she showed up as Timothy's would-be girlfriend in the depressing Ronnie Corbett TV comedy 'Sorry!' (see also Roy Holder), but faded from sight in the '80s.

At one point, her Wikipedia entry contained a suggestion that her career was brought to an abrupt halt by injury in a serious accident, much as her 'George & Mildred' co-star Norman Eshley's was, although hers was described as a (rather unlikely-sounding) mountaineering fall. This may have been some sort of unedited wiki-mischief, as currently it just says that she retired from acting in 1988.

Either way, I hope she is in good health these days, and hopefully there might be more acting work in Sheila Fearn's future.