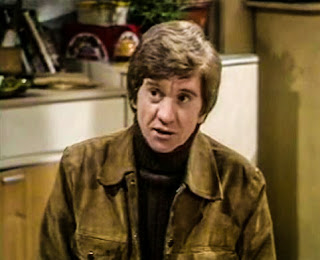 A tall Northern actor with a distinctive, slightly crumpled face and often unruly hair, who pops up in quite a few small roles as coppers and servicemen, but making something of a speciality of the befuddled passer-by. You might recall him as the likeable, cricket-loving vegetable pilferer in 'The Good Life', or as the unfortunate stranger lured to Terry's surprise birthday party in 'Whatever Happened to the Likely Lads?'.


﻿﻿A stalwart character actor, appearing in a number of stalwarts of British television: 'Minder', 'Z-Cars', 'Softly Softly', 'Bergerac', 'The Gentle Touch', etc. The chances are you've never particularly noticed him, but he's been there all the same. Some middle-brow dramas too, 'Anna Karenina', 'War and Peace' and 'A Tale of Two Cities'. His cult TV tally includes 'Doctor Who' (two stories from the Tom Baker era, one with Peter Davison), plus 'Jason King', 'The Frighteners' and 'Survivors'.
Sightings on the big screen are mostly in the war and spy genres, and often uncredited: 'On Her Majesty's Secret Service' (1969), the forgotten Len Deighton story 'Only When I Larf' (1968), and 'Submarine X-1' (1968), although he does get a speaking role in the latter.
He doesn't seem to have done much since the late-'80s, but I trust he is alive and well.