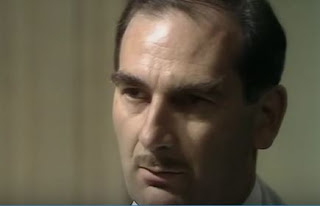 The voice of the rascally Joe Grundy on the BBC Radio 4 serial 'The Archers', Edward Kelsey is a stalwart actor with a list of TV and film credits stretching back to the late '50s. He appeared in several of those timeless series which we now like to call 'cult', including both 'The Avengers' and its '70s rehash 'The New Avengers', as well as 'Colditz', 'Doomwatch', 'The Saint', 'The Tripods' and three different Dr Who stories; the Hartnell-era 'Slave Traders', 'The Power Of The Daleks' with Patrick Troughton, and alongside Tom Baker in 'The Creature From The Pit'.
A popular voice actor, he is also known for providing the bluster of Danger Mouse's boss Colonel K and his arch enemy Baron Greenback, and creating a pastiche of his own Joe Grundy role as Mr Growbag in the Wallace & Gromit film, 'The Curse Of The Were-Rabbit'. Other animations to benefit from his low growl include 'The Wind In The Willows', 'The Reluctant Dragon' and the Terry Pratchett-penned 'Truckers'.
Not very much comedy, save for a spot in 'The Vicar Of Dibley' and 'Minder', but lots of mainstream TV drama over the past four decades. Highlights include 'The Plane Makers', 'Cranford' and 'Anna Of The Five Towns', with more everyday stuff like 'The Cedar Tree', 'Softly Softly', 'Penmarric', 'Z-Cars', 'Angels' and the ever-present 'Casualty'.