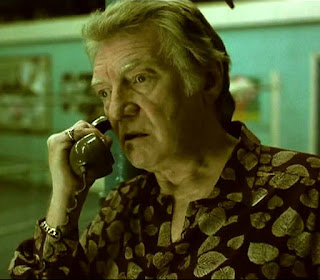 You know him. Intense, real-deal, London-born actor who has virtually created his own sub-type of the gimlet-eyed cockney villain: hard, trim, mod-stylish, a ruthless but rational enforcer or fixer. A slightly different proposition from the affable yet psychopath mob boss (typified by Bob Hoskins, Ray Winstone, Johnny Shannon, etc), you can watch him in action in some tough East End crime movies beginning with 'The Squeeze' (1977) and encompassing the classic 'The Long Good Friday' (1980) and the latter-day set of 'Lock Stock & Two Smoking Barrels' (1998) and 'Snatch' (2000) – running through to 'Jack Falls' (2011) and the less than satisfactory reboot of 'The Sweeney' (2012).

On TV, as you might expect, there's a lot of London hardcase actioners and cop shows, sometimes on the side of law and order but more often than not as a villain of some sort. He's in 'Minder' ('90s variety) and 'Strangers', as well as a selection of lesser fare: 'Bergerac', 'Chinese Detective' etc,  - and he's racked up an impressive eight different characters in episodes of 'The Bill' stretching from 1985 to 2006...

Less expected are the roles in a range of comedies. He was in the later series of 'Romany Jones' after the death of James Beck, playing (fell-off-the-back-of-a) lorry driver, Ken. He also appeared in 'Birds Of A Feather', 'Keep It In The Family' and 'The New Statesman', before a memorable turn as a boxing promoter in 'Knowing Me Knowing You With Alan Partridge' led to 'The Armando Iannucci Shows' and Matt Berry projects 'Snuff Box' and 'Toast Of London'.


All good stuff, and I notice he's also providing voice performances alongside the remarkable David Graham as one of Parker's dodgy mates, Light-fingered Fred, in the latest version of 'Thunderbirds Are Go'.