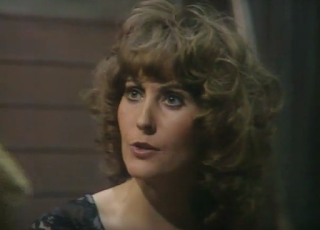 Getting her first camera appearance in 'Holiday On The Buses' (1973) as another of those easy-going dollybirds unfathomably drawn to brilliantined bus driver Stan, Maureen Sweeney went on to establish a solid career lasting well into the 2000s.

A string of tough, sassy roles followed, mostly playing villains' wives, barmaids, and blue collar mums in various London-set dramas and comedies. She had a regular stint in the caravan comedy 'Romany Jones' with Arthur Mullard and the irreplaceable Queenie Watts, and later appeared in women's prison melodrama 'Within These Walls' and matronly mobster series 'She's Out'.


Perhaps surprisingly, she only pops up once in 'The Sweeney', but can be spotted in programmes as varied as 'The Dick Emery Show', 'Crossroads', 'The Duchess Of Duke Street', 'Only Fools And Horses', Rik Mayall's short-lived comedy 'Believe Nothing', and the teen TV drama 'Running Scared'.


Later appearances see her move into the familiar TV territory of 'The Bill' and 'Casualty' with her last role to date seemingly being in 2006.

Email ThisBlogThis!Share to TwitterShare to FacebookShare to Pinterest
Labels: Holiday On the buses, Moody & Pegg, Romany Jones, Sorted, The Bill, The Echo, The Sweeney, Touching Evil, Within These Walls