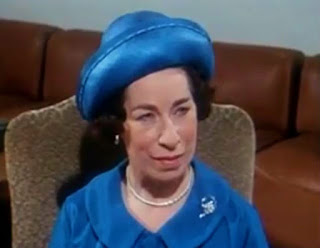 The ultimate type-cast actress may be Jeannette Charles, who for several decades has been film and TV's default lookalike for the Queen. Does she really look like her? I'm not too sure, there might be something of the Princess Annes about her long upper lip, but to me she's nothing much like the real item. Her own face has become so familiar, though, that she is virtually a national institution herself - the official stunt queen.

Though not really an actress as such - she's rarely given any lines - apparently she was involved in theatre as a young woman, but rarely cast because of her 'uncanny likeness' to the royal princess, and later the young queen, in an age of greater deference. The similarity was again remarked by her local paper in Essex in the early '70s, and with the coming of the irreverent era of post-Python comedy, she's been constantly in demand, usually as a simple sight-gag, and has been seen in a number of productions of wildly variable quality.


Spike Milligan's establishment-baiting silliness made great use of her in series including 'Q6', 'Q7' and 'There's A lot Of It About', and she's seen in contemporary comedies such as 'Rutland Weekend Television', 'The Rutles: All You Need Is Cash', and later 'Not The Nine O'Clock News' and 'Never The Twain'. In an episode of 'Mind Your Language' with a little twist, she plays a woman who is mistaken for the queen. Kids 'TV was also a regular earner, with appearances on 'The Sooty Show', 'On Safari', 'Ratman' and the like.


Born in 1927 (a year later than the real deal), she is now in her nineties and in retirement in her native Essex. Hopefully she will receive her telegram at the appropriate juncture - I wonder if any additional comment will follow the centennial good wishes?