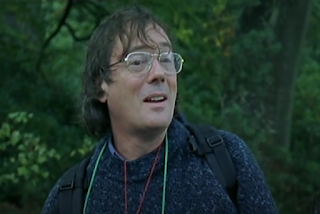 Jeff Rawle:
I first remember seeing Jeff Rawle in the 1970s TV series 'Billy Liar', the first version of Keith Waterhouse's kitchen-sink Walter Mitty that I ever encountered. With its budget studio-bound look and sitcom-hysterics live audience, it made somewhat underwhelming television, and was soon lost deep in the recesses of my memory. When I read the book and saw the 1963 film in the '80s, there was barely a flicker of brain cells to remind me of this incarnation, yet it turns out that Rawle and his Mr Shadrack (Colin Jeavons) - though forever in the giant shadows of Tom Courtenay and Leonard Rossiter - made an impact on me after all.
With that pinched, underfed urchin look of '70s youth, Jeff Rawle played Billy with energy and verve, albeit with none of the nuance of the film version, which is understandable as it was virtually his first television acting role. The show was popular at the time, but didn't quite make him a household name. Roles on television that immediately followed tended to be rather slight, but included some variously serious dramas, such as Bertold Brecht's 'Baal', and the odd 'Play For Today' among the 'Van Der Valk', 'Crown Court' and 'Hammer House Of Horror'.
By the end of the '80s there were some more substantial recurring castings, in 'Angels', the 'Doctor Who' adventure 'Frontios', 'Fortunes Of War', and 'Vote For Them', before things started to brighten up with the odd 'Minder', 'Boon' and 'Wycliffe'. It was two comedy offerings that brought him more into the public eye once again: 'Faith In The Future' - a sequel to 'Second Thoughts', with Rawle replacing James Bolam as the foil to Lynda Bellingham, with Julia Sawalha and Simon Pegg in early roles; and more notably 'Drop The Dead Donkey' - the slightly topical newsroom comedy which featured him as the timid George Dent caught in a constant battle of egos and politics.
Possibly, it was his affecting portrayal of retired rocker Roger Fenn in 'Doc Martin' that led to his casting in 'Harry Potter & The Goblet Of Fire', but whatever it was that led to the role, it certainly proved to be leg-up in terms of profile. Although not a large part, Amos Diggory plays into one of the crucial plot points of the film via his screen son, Cedric, (future star Robert Pattinson) and the emotional fall-out of his death.
This side of the Potter, Jeff Rawle has been in some interesting and worthwhile stuff, such as an enjoyable drama based on the early development of 'Doctor Who' - the Mark Gatiss-helmed 'An Adventure In Space And Time' - and several episodes of 'The Durrells', but perhaps got most attention as the 'Hollyoaks' serial killer Silas Blissett, investing the character with a level of depth that seems to have sent thrills racing through the soap-watching audience.
Perhaps the '70s TV 'Billy Liar' is due for a rewatch? It's been made available on DVD and features previous Familiar Unknown subjects George A Cooper and Colin Jeavons who are almost always worth a look. Whatever the verdict, Jeff Rawle certainly deserves my modest salute.