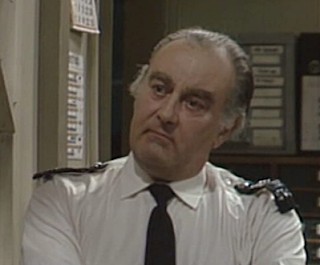 A lot of policemen. Quite a few landlords. But a LOT of policemen. The perpetually unamused Michael Stainton must be familiar to anyone who had even a casual acquaintance with British television in the '70s and '80s. In comedy and in drama, this solidly imposing actor appeared frequently in blue as one of the quintessential portrayers of the uniformed plod. He's the  copper in 'Whatever Happened To The Likely Lads?', 'Rising Damp', Citizen Smith',  'Only Fools And Horses', 'Never The Twain' and 'Mind Your Language', but also in 'Juliet Bravo', 'The Ruth Rendell Mysteries', 'Lord Peter Wimsey', numerous television plays and even 'Brideshead Revisited'.

Michael Stainton's earliest roles were on TV back in the mid '50s, already stepping easily from historical dramas and crime shows into light entertainment and comedy such as 'Hancock', 'The Army Game', 'Benny Hill', 'Hugh & I' and Sid James's popular show 'Citizen James'.

In the '60s and '70s, the mix of drama and comedy was still strong, with the likes of 'Softly Softly', The Plane Makers', and 'No Cloak-No Dagger' more than offset by 'The Liver Birds', 'All Gas And Gaiters', 'Dad's Army', Moody & Pegg', 'The Two Ronnies' and 'Steptoe & Son'. To these we can add old favourites of this blog, 'Shelley', 'A Sharp Intake Of Breath' and 'Ripping Yarns'. He was also a regular in Jimmy Edwards' school comedy 'Whack-O!', which seems more bizarre every time the recollection of it crops up these days.

This momentum was carried into the '80s and he appears in a lot of popular shows. He was Sergeant Tipper in the genteel detective series 'Charters & Caldicott', and pops up in programmes as diverse as the TV comedy vehicles of Russ Abbott, Kenny Everett, Kelly Monteith, Les Dawson and Les Dennis and the drama potboilers of 'The Bill' and 'London's Burning'.
Big screen appearances have been scant, a few obscure films and an uncredited part in 'Carry On Dick' (1974). To view his TV track record though, is to scan lightly over the history of British middle-brow entertainment of five decades, and for that he is surely due a salute.