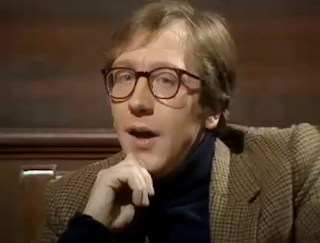 You may not be able to place where you've seen Scottish actor Enn Reitel, but you've certainly heard his voice without ever realising it. An enormously versatile and in-demand voice actor, he was a key member of the 'Spitting Image' team - putting words in the wobbling mouths of Geoffrey Howe, Roy Jenkins, Leonard Nimoy, Vincent Price, Donald Sinden, Julian Clary, Clint Eastwood, Norman Fowler, Mikhail Gorbachev, Dustin Hoffman and Ian St. John, to name but a few...

He has appeared on-screen occasionally, and there was even a period in the '80s where he seemed to be positioned as an upcoming sitcom star, somewhat in the vein of Hywel Bennett's sardonic 'Shelley'. He took the title role in the reboot of Kingsley Amis's 'The Adventures Of Lucky Jim' with Glynis Barber and David Simeon. At one point he was also mooted to play the part of Del Boy in 'Only Fools And Horses', which would surely have been a mistake, even without the benefit of hindsight.


Menawhile, 'The Optimist' was a Channel 4 curiosity. An evocation of the poignant humour of the silent era, shot on location entirely on 16mm film. It was an elegant idea, well realised and running to a second series, but few seem to remember it now.

There was also the Clement & LeFrenais comedy 'Mog', about a burglar feigning insanity to dodge jail. Unlike their classic creation, 'Porridge', 'Mog' was short on comedic spark and lacked that show's unforgettable characters. Marty Feldman was originally cast as Mog, but died before filming began. Reitel struggled manfully with the part, but it was a narrow premise and little too dark to be at all popular. To be honest, I can't imagine the inevitably hectic overacting of Marty Feldman making a success of it either.

Enn Reitel's lasting claim to fame is his ongoing voice-over work. His versatility with accents is the perfect adjunct to his natural rich baritone, and he seems able to jump from straight advertising and narration work to the most extreme parody without missing a beat. The computer game industry has been a fertile territory for him, with credits in a number of big-franchise titles like 'Avatar: The Game', 'Star Wars: The Old Republic', 'Elder Scrolls', 'Chronicles Of Narnia' and 'Metal Gear Solid'.

Here's a little voice-over agency playreel to give you a sample of his work.