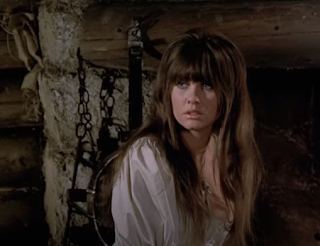 One of the classic beauties of the golden era of Hammer horror films, Judy Matheson's most celebrated roles are in the saucy 1971 double-bill of 'Twins Of Evil' and 'Lust For A Vampire'. Other cult favourites of the era include 'Crucible Of Terror' (1971) and 'The Flesh & Blood Show' (1972), non-Hammer and more in the contemporary shocker mould than the gothic excesses of the former.

After drama school and some early stage successes she found herself cast, alongside Euro superstar Capucine, in a Spanish giallo-style psychodrama, 'The Exquisite Cadaver', AKA 'Las Crueles' (1969). Although obscure at the time in the UK, it now seems to be partially eclipsing the traditional horrors as her stand-out performance. It's certainly a stylish piece, with the expected giallo tropes of lurid colours, modish fashion-house photography, mild nudity and outlandishly playful shocks. Matheson is very watchable in it, a screen presence not overshadowed by her more senior co-stars.

She made another little-known gem in 'The Emergence of Anthony Purdy, Esq, Farmer's
Labourer' with the great Freddie Jones, a 1970 exercise in rural conjugal awkwardness in grainy black and white. The same year she appeared on television in a documentary about the RSC featuring her friend, a talented young actress called Helen Mirren. Shortly before this,  she was shortlisted for a lead role in the TV sensation of 1969, 'Take Three Girls'.

That didn't happen though, and instead the early '70s saw a string of less-than-stellar film and TV offers. She's in a couple of typical Brit sex comedies, 'Confessions Of A Window Cleaner' (1974) and 'Percy's Progress' (1974), and adds some glamour to episodes of 'The Adventurer',  'The Sweeney' and 'The Professionals' before landing a longish stint on the teatime soap 'Crossroads' and a tiny role in a weird costume in 'Blakes 7'.

From this point she seems to have moved focus to voiceover and continuity announcement work. She was a regular face on my local ITV region, TVS, in the '80s. In fact, she was out of the TV and film loop for 37 years, between 1980 and 2017, with the exception of personal appearances at Hammer fan conventions.

Roll on 2017 however, and it seems she's been lured back into the limelight by David Barry, better known as mummy's little soldier Frankie Abbott from 'Please Sir!'. Initially, he created a Fenn Street-meets-Vampires concoction called 'Frankula', followed in 2021 by 'The Lives Of Frankie Abbott'. There's also 'The Haunting of Margam Castle' which, like 'Frankula', features fellow cult horror star Caroline Munro, and 'What Did You Do In The War Mama?' with the similarly celebrated Madeline Smith. An intriguing development that seems likely to get the attention of the Hammer fanbase.

So, a salute then, but watch this space for updates.

Email ThisBlogThis!Share to TwitterShare to FacebookShare to Pinterest
Labels: Blakes 7, Citizen Smith, Crucible Of Terror, Hammer, Lust For A Vampire, Shelley, The Flesh And Blood Show, The Professionals, The Sweeney, topless, TVS, Twins Of Evil