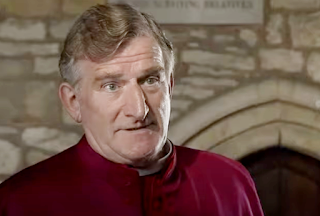 Craggy 6'2" actor Malcolm Storry is something of a stayer. Since the '70s he has loomed over the cast of an impressive collection of popular TV shows and appeared on the big screen in some big films, yet his is another of those names you might find harder to recall.

His height makes him an imposing casting for a policeman, and he has played them in a wide range of settings; from the gas-lit streets of the Jeremy Brett 'Return Of Sherlock Holmes', to the more recent cases of 'Rumpole Of The Bailey'. 'The Singing Detective',  'The Chief' (with Tim Piggott-Smith), 'Inspector Morse', and the Bill Murray spy-comedy film, 'The Man Who Knew Too Little (1997).

His comedy performances are also splendidly varied. He crops up in various roles in the David Jason vehicle 'A Sharp Intake Of Breath', and is the conventionally intimidating agent Peterson in 'The Biederbecke Tapes', failing to intimidate the show's cynical teacher duo. There was also the David Nobbs farce 'Dogfood Dan & The Carmarthen Cowboy' about truck driving pals unknowingly having affairs with each other's wives.

In the world of drama, he impresses in 'The Death Of A Son', 'Bread Or Blood', 'The Shadow Line', and is memorable in green wig and beard in the 1991 'Gawain & The Green Knight'. A lot of decent middle-brow stuff is also in there: 'Wycliffe' and 'Doc Martin' for example, depending on your tastes, and a ton of popular/populist shows from 'Pie In The Sky', 'Ruth Rendell Mysteries' and 'Midsomer Murders' to 'Boon' and 'The Professionals'. On the whole it's all quality stuff, recent primetime hits having included 'Father Brown' and 'Doc Martin'