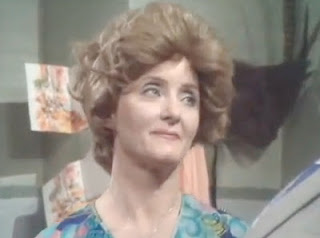 Probably more of a song and dance turn than a straight actress, she made her name in West End musicals throughout the '50s and '60s, but she cornered the market in sassy, no-nonsense dames in TV comedy and variety for a good chunk of the '70s and '80s. You will have almost certainly forgotten seeing her in 'The Benny Hill Show', 'The Kenny Everett Show', 'The Morecambe & Wise Show', 'Larry Grayson', 'Bernie' (as in Winters), the excruciating 'Leslie Crowther Show', and (shudder) 'The Jim Davidson Show'.


Acting parts encompass comedies of variable quality, from 'The New Statesman' and 'Smith & Jones' to 'Rings On Their Fingers', 'Robin's Nest' and kids' non-favourite 'Super Gran' (playing a character called Wendy Whiplash). A bonus role arrived in the '80s with a semi-regular turn in 'Keeping Up Appearances' as well-off sister Violet.