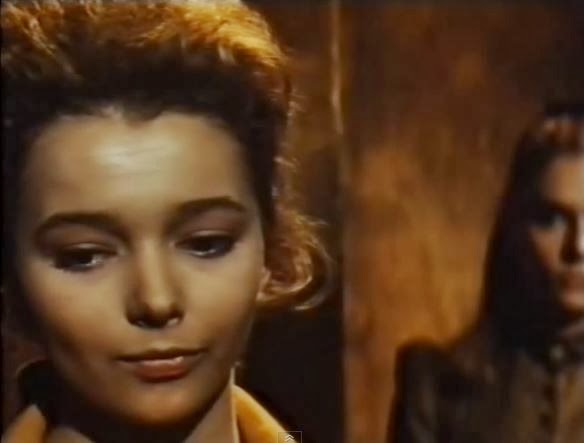 Slightly ashen and spooky doll-faced actress with a high forehead and expressive eyebrows, unmemorable except perhaps as the spoilt Catalina in 'The House that Screamed' (1970), where she got on the wrong side of sadistic finishing school head Lilli Palmer in full-on Joan Crawford mode. She was another bratty type in 'The Gates of Paradise' (19  ), with a young Jenny Agutter as her put-upon counterpart. In 'Here We Go Round The Mulberry Bush' (1968) she was in more conventional dolly-bird territory as Gloria, one of Barry Evans's passing fancies.


After a few cherubic child roles in the late '50s (her sister Carla was also a child actor), Pauline seems to have found jobs a little thin on the ground. Perhaps her slightly disconcerting good looks were a bit out of step with the fun-loving mini skirted girls who populate the swinging output of the following decade, although she does appear in 'Here We Go Round the Mulberry Bush' (1968) with the cheeky, pre-'Mind Your Language' Barry Evans. But rather as Barbara Steele found success in the Italian horror market, Pauline Challoner seems to have appealed to the makers of lurid thrillers in Spain, and her last f'ilm appearances include the aforementioned 'The House That Screamed' (aka 'La Residencia', 1969), 'La Ultima Viage' (1974), and 'Tocata Y Fuga de Lolita' (1974). After that, she appears to have given up acting altogether.

Email ThisBlogThis!Share to TwitterShare to FacebookShare to Pinterest
Labels: Carve Her Name with Pride, Hammer, Jenny Agutter, Lilli Palmer' Here We Go Round The Mulberry Bush, Pauline Challoner, Residencia, Szabo, The Gates of Paradise, The House that Screamed, topless