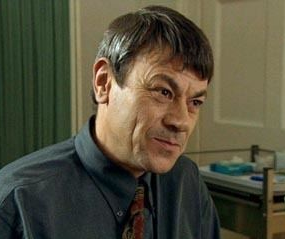 Distinctive actor, with a combination of tough-guy and strangely elfin looks - thanks perhaps to his expressively pointy eyebrows - yet equally adaptable to everyday everyman roles. He first caught my attention from cropping up in a lot of modern comedy of the oddball sort, (being one of Chris Morris's development team for the radio show 'Blue Jam' and his later TV output), and also popular with the likes of Kevin Eldon and Reece Shearsmith.

Trained at RADA in the mid 70s, his early television jobs saw him tackling some extra and bit-parts in low budget sci-fi faves, such as 'Tomorrow People', 'Sapphire & Steel' and 'Blakes 7', though seemingly never 'Doctor Who'.

He proved extremely versatile, with small roles gradually giving way to better things in an ever-widening range of genres. He was in 'Shine On Harvey Moon', had a prolonged stint on a later series of 'Grange Hill' as Mr Bentley, and appeared as several characters on both sides of the law in 'The Bill'. He was also in 'EastEnders', 'Bad Girls', 'Silent Witness' and 'Doctors', as well as an episode of 'Killing Eve'.

But it's in comedy that he's been most visible and memorable, with appearances in Chris Morris's 'Brass Eye' and 'Jam', 'Black Books', 'Saxondale', 'It's Kevin', 'Psychoville', 'Benidorm' and most recently, 'Sex Education'.

Mostly pretty interesting stuff. One of those actors that it's almost reassuring to see appear, giving the impression of being in good hands. I salute you.