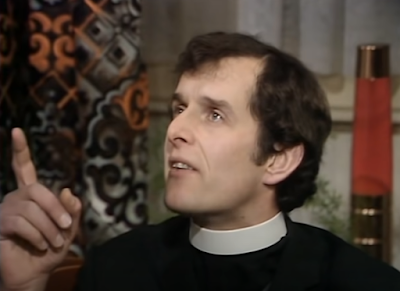 David Rowlands:
David Rowlands, with his shock of hair and strong features, pops up fairly regularly in Brit TV of the '70s and 80s, and reminds me a little (and in a good way) of Don Martin's cartoon characters from Mad Magazine.

Rowlands' stock in trade is mainly characters from the politer end of English society: vicars, vaguely aristocratic and upper middle-class types, military officers, doctors, the occasional scientist and the nicer sort of policeman.

He first starts to make appearances in the mid-60s in a fairly even mix of dramas and comedy/variety output, but throughtout his career there is a strong tilt to the comedic side. He can be seen in a lot of mainstream sitcoms, on ITV in the channel's finest comedy 'Rising Damp', and its lesser brethren: 'Bless This House', 'On The Buses', 'Father Dear Father', and Love Thy Neighbour'. Over on the BBC, he crops up in such stalwart midweek fare as 'Are You Being Served?', 'Terry & June', 'Citizen Smith' and 'Allo Allo'. He also remained in demand for sketch and variety shows such as 'The Dawson Watch', 'The Two Ronnies', 'Cannon & Ball', 'Kelly Monteith' and 'Mike Yarwood In Persons'.

Some of the comedy productions he appeared in are now considered classics, witness the likes of 'The Fall & Rise Of Reginald Perrin', 'The Hitchhikers Guide To The Galaxy', and 'Blott On The Landscape'. He's also got a decent role in the Tom Baker-era 'Doctor Who' adventure, 'The Sun Makers' as an inquisitive intellectual in a world of human slave-drones, earning a whole bag of jelly babies for his assistance in defeating a dastardly Henry Woolf. 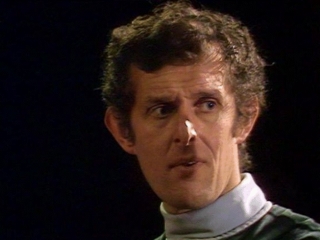 In the field of more heavyweight drama, he can be spotted in 'Take Three Girls' (and the '80s revisit, 'Take Three Women'), the Boer War saga 'The Regiment', Dennis Potter's 'Pennies From Heaven', and that bizarre ancient-world pot-boiler 'The Cleopatras'.

Email ThisBlogThis!Share to TwitterShare to FacebookShare to Pinterest
Labels: Allo Allo, Are You Being Served?, Bless this House, Doctor Who, Hitchhikers Guide To The Galaxy, Reggie Perrin, The Two Ronnies, Vampira