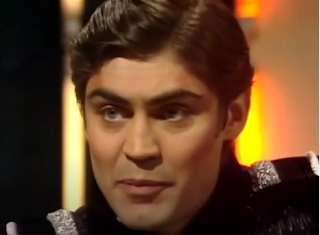 Broodingly malevolent-looking and an imposing 6'4", Nick Brimble has made more than a few appearances, mainly as villains and heavies, over the years. Starting in the early '70s he started racking up roles in the popular tough-guy shows of the time, notably 'The Sweeney' on TV and in the feature film, where he was a semi-regular as DS Burtonshaw, and the likes of 'Z-Cars', 'Softly Softly', 'The Professionals' and 'Quiller'.

He can also be found in sci-fi shows including 'Space:1999' and 'Blakes 7' and had recurring roles in major hits of the time such as 'Danger UXB' and 'Penmarric' and historical serials like 'John Silver's Return To Treasure Island' and the ambitious pan-European 'William Tell' (AKA Crossbow) which was too similar to the smash-hit 'Robin Of Sherwood' to get much traction in the UK.

This regular UK television work was punctuated with film offers, some of which were for pretty major movies. He is the bearded Little John in 'Robin Hood Prince Of Thieves' (1991), and before that he crops up in 'Lust For A Vampire' (1971), 'Silver Dream Racer' (1980), 'Who Dares Wins' (1982), and 'Roger Corman's Frankenstein Unbound' (1990) with John Hurt and Raul Julia.

Television work has continued into the 21st century and you're sure to have seen him if you've watched mainstream broadcast TV much at all in the last 30 years. He appeared in 'The Bill' no fewer than six times between 1988 and 2007, had a long story arc in 'Emmerdale', and appeared in the mini series 'House Of Cards' and its follow-ups 'To Play A King' and 'The Final Cut'. And that's before we get into the inevitable round of 'Midsomer Murders', 'Boon, 'Dempsey & Makepeace', 'Bergerac', 'Wycliffe', 'Doc Martin', 'New Tricks' and 'Heartbeat'.

In fact, so distinctive and talented is Nick Brimble that it's a surprise that fewer people know his name. As with all these little salutes to character actors, I hope more people will recognise and enjoy his performances when they spot him in future. I know I will.