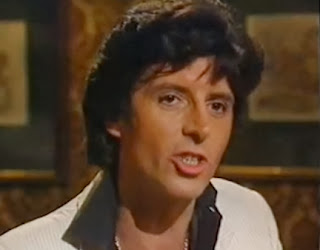 The tall dark and handsome type, from the same shelf as Paul Nicholas and David Essex perhaps, but not destined for top billing. Peter Blake is probably most remembered as the insufferably cocky Kirk St Moritz in the lonely hearts sitcom 'Dear John' with Ralph Bates and Belinda Lang. I seem to remember it being a genuinely jaw-dropping plot twist when Kirk was revealed to be the alter-ego of a timid sad-sack who lived with his elderly mother at the end of the series.


After drama school he started out in trendy stage productions like 'Jesus Christ Superstar', 'Joseph and his Amazing Technicolor Dreamcoat' and 'Rocky Horror', while snagging TV extra roles and working as a stage manager in Soho strip clubs. Perhaps his contacts there led to his first film part in the sex comedy 'Intimate Games' (1976) a typical affair with the usual mix of goose-pimpled dollybirds and veteran character actors (in this case, Mary Millington meets George Baker, Hugh Lloyd, Queenie Watts, and Johnny Vyvyan).

An interesting aside: He was Eddie, the rock'n'roll revival Pepsi drinker in their successful '70s advertising campaign. Like this one.