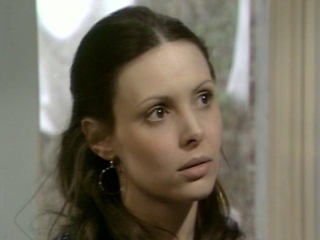 
Lovely lovely Diane Keen. During the '70s she was a regular presence on television screens, playing attractive women in roles that ranged from the demure to the dubious. Making her debut in the long-lost sci-fi mod pic 'Popdown' (1967) and the ever-present 'Here We Go Round The Mulberry Bush', but she soon graduated out of the miniskirt moppet casting pool and into some more serious productions, including Fay Weldon's Wednesday Play 'Fall Of The Goat', and quality output like 'Budgie', 'Fall of Eagles', and the 1975 series of 'The Legend of Robin Hood (with 'Blake's Seven's Avon, Paul Darrow, as the Sheriff of Nottingham). She was also in the rather exhausting kids' drama 'The Feathered Serpent' as an Aztec queen. She went on to star in wholesome sitcoms like 'Rings On Their Fingers', 'The Cuckoo Waltz' and 'You Must Be The Husband'. As the '70s became the '80s she matured prettily into roles in 'The Shillingbury Tales', 'Ruth Rendell Mysteries', 'Oxbridge Blues' and 'Foxy Lady' before finding a nice regular slot in the long-running 'Doctors'.

One minor hiccup was caused by the generally harmless (it's got Christopher Biggins in it) British soft-core movie 'The Sex Thief' (1974). Never too shy about doing topless scenes, she did a stirling job in this limp effort, which duly slipped into obscurity. Unfortunately, the film was later 'beefed up' by a foreign producer with hard-core scenes spliced in, making Ms Keen's role appear decidedly spicier. It probably only cemented her place as '70s ITV sex-symbol.