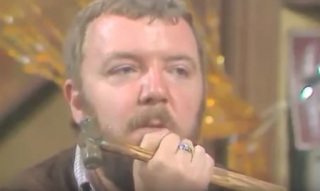 
Stolid-looking character actor who seems to bring unusual depth and oddness to the parts he plays. Despite appearing in dull fare like 'Emmerdale' and 'Casualty', he's also played a Nazi, a Roman slave, a prison warder (in 'McVicar'), and any number of coppers and shady businessmen. Films include 'A Private Function', 'Unman Wittering and Zigo', 'Clockwise' and 'Britannia Hospital'.


For many, he'll always be the endearingly bone-idle PC Wilmot from the inoffensive police comedy 'Rosie', but might also be remembered for the utterly baffling, Nigel Kneale-written, sci-fi sitcom 'Kinvig', in which he starred.