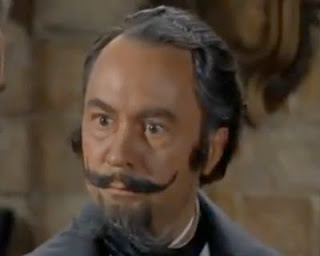 A national treasure and the perfect incarnation of elderly timidity, but in my opinion, sadly wasted as Clegg in 30-odd years of 'Last Of The Summer Wine', which would probably be nostalgically admired if they'd stopped after three or four series. Wallace in 'Wallace & Gromit' and Ratty in 'Wind In The Willows...' seem to be his only other parts since the mid-'70s, but before that he was a useful and adaptable actor in a mixed bag of interesting roles. He appeared in 'Callan', 'Doctor Who', 'Danger Man', 'The Capone Investment', 'Catweazle' and 'The Pallisers', and in films like 'Mouse On The Moon', 'Charlie Bubbles', 'Taste The Blood Of Dracula' and 'Scream And Scream Again'. Rather than one of him wearing a flat cap or sitting in a wheelbarrow, here's a picture of him with a gun, from 'The Persuaders'