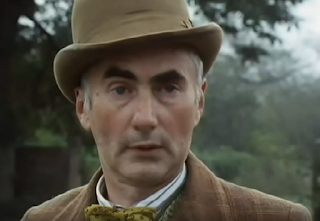 I believe he retired from professional acting a few years ago – and now designs gardens and paints in Cambridge – but he's a welcome sight whenever he pops up in roles as put-upon coppers, harassed officials, and quizzical passers-by. He has a distinctive, slightly nasal, twang to his voice, and his downbeat, measured delivery often serves to suggest a level of intellectual depth and dignified patience, even to the most modest role.


Seen in TV including 'Campion', 'The Sweeney', 'The Rivals Of Sherlock Holmes', 'Citizen Smith', 'Coronation Street' (as three different characters, in '68, '78 and '99), and, more memorably for me, 'Murder Most English: A Flaxborough Chronicle' as ghoulish forensic officer Mr Warlock.

As he was born locally to me, in Rochester, Kent, an almost exact contemporary of my dad, it's a particular pleasure to salute him and his work.
John Tordoff - imdb profile
Posted by fiftywatts at 03:43